To celebrate the survival of Tribune, a year after they became fully independent of external financing, Think Left is reblogging their editorial.  It is our way of showing our support for the Oct 20 march as well as our support for this vitally important newspaper of the left.  Subscription and donor information available here.

Tory future does not work – march for one that does

Once again, the labour movement has taken to the streets to march for a future that works. It is a simple demand, commanding universal support

Once again, the labour movement has taken to the streets to march for a future that works. It is a simple demand, commanding universal support. No politician or political party, let alone a government of two political parties, would gainsay it. Yet it is universally understood that the future does not look like working for a very long time indeed. Except for the rich who are getting richer, the mass of the people in the countries of Britain will continue to see the quality of their lives deteriorate.

Recognition that it need not be necessarily so is widening. But the lack of courage in politicians from the British Labour Party to social democrats worldwide to face up to the fact that capitalism has reached an historic breaking point holds back the chances of a radical alternative. While David Cameron uses an otherwise empty conference speech to demonise benefit claimants – an instinct he shares with Labour’s own conservative wing in Progress – Nick Clegg’s Liberal Democrats continue to prop up an austerity drive that is killing growth and devastating public and welfare services. Ed Miliband issues a “One Nation” call to arms but gives little indication of where the weapons are and on what ground will the issue be fought.

Five years after the start of the current financial “crisis”, we have learned the extent to which the crisis applies only to those outside the financial elite of those whose irresponsible greed caused it in the first place. The unions who represent those hardest hit recognise the need for a new, fairer and more just economic order. Not just for the justice and benefit of their members but, as ever, for the national economic wellbeing and commonwealth of communities. They will be derided by Conservative voices for having the temerity to take to the streets to voice their justified concerns.

For the Tories are proving with every passing day that they are the party of and for the rich, a party not of one nation or even all the nations of Britain but a party of a small part of one nation: the English south east. Quite where the Lib Dems stand after watching their “brakes” on the worst excesses of George Osborne being burned through one after another is a mystery, unless political annihilation is their only true goal.

The International Monetary Fund should be marching with the unions for a future that works. Its senior representatives have pronounced that austerity is harming the world economy, warning that it is not the way out of the economic crisis but the route to a vicious cycle of decline. Mr Miliband has shown he understands the problem. He needs to show he accepts the solution. 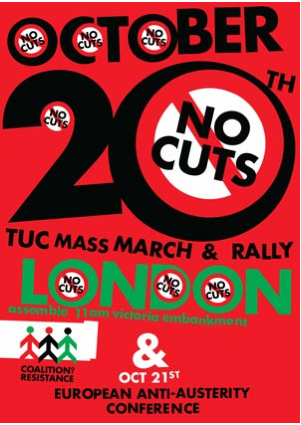