Bedroom Tax U Turn? – Not really But WE can force one!

So according to The Guardian Today “Bedroom tax ‘in chaos’ after Iain Duncan Smith announces exemptions” (i); an exciting headline when being faced with the prospect of eviction come June.

But after only the first paragraph, my heart sank back to it’s regular place nowadays, somewhere around my hips. This is because with only three weeks to go IDS has decided to exempt foster carers and parents of teenage armed forces personnel from the charge.

Now I’ve nothing against either group being exempt, but it makes not one iota of difference to me or any other disabled adult, parent of disabled children, parent with shared custody, low paid workers etc, who are also social housing tenants and need a second, or more, bedroom to live comfortably

Upon reading the article I found myself asking why had the ever odious IDS ‘chosen’ these two groups; and then it dawned on me, both foster parents and those who have family in the armed forces are seen by most people as ‘deserving’. By this I mean both members of the armed forces and those people who foster children are in reality providing a public service; this led to a vital image of IDS & Co becoming increasingly rattled by the increasing  public protest against this disgraceful law, and how over the brandies following their subsidised three course meals, they agree upon the crumbs to throw at the braying hoards.

And then I came across another article, courtesy of the wonderful guerillapolicy.org which gave me a little hope; in it the author Joe Halewood sets down how if every tenant appeals to their Local Authority (LA) against the the Bedroom tax; the very process LAs must follow in Law to deal with individual appeals, would create a situation of complete melt down. I’m not going to cover the essence of the article here, I urge everyone affected to follow the link below (ii) and do what I’m going to do APPEAL.

If nothing else, at least I’ll get the satisfaction of doing something positive and taking back some of the self respect, this Government seems determined to destroy.

Join the protests against the ‘Bedroom Tax’

The bedroom tax will still be affecting over 700,000 people – the majority of whom are disabled. 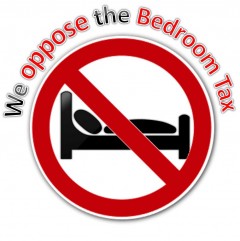 If you want to join the protests against the bedroom tax planned for this Saturday 16th March – have a look if there’s one near you.

(iv) Left Futures:Join the protests against the ‘Bedroom Tax’

(v) Also from Think Left: Foster Parents will have to pay bedroom tax , but not parents of pupils at Eton, Tom Pride

1 thought on “Bedroom Tax U Turn? – Not really But WE can force one!”