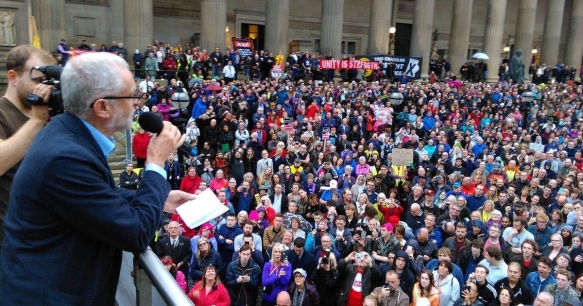 From the moment he was thrust unwillingly into the limelight as party leader, he began building a movement. Initially, he was dismissed by the right wing as a joke. After all, few people living had ever witnessed a genuinely compassionate, socialist leader of the Labour Party and they assumed it was an unsustainable aberration. It wouldn’t last. He has no experience, they thought. Toppling him will be easy, they thought. One puff of wind will blow this scruffy upstart away, they thought. But they were wrong.

It quickly became apparent that this gently spoken old man was not as vulnerable as he appeared. His roots were deep and unmovable. No mere draft of hot air from the right was going to topple him. So it was that the entire right wing establishment began to recognise him for the threat he was.

Not a threat to national security, or the economy, though they would spin it thus, but a threat to their gravy train; to their extortion of workers; to their laundering of tax money into their own pockets and, for some at least, to their erstwhile immunity to investigations of corruption and war crimes.

And so the storm began. It started with attempts to misrepresent his past actions, accusations of sympathy for terrorism, which were easily debunked by the winner of two major peace prizes.

The right wing in his own party attempted to portray him as unelectable, even though their attempt was an indication that they believed anything but. Many bought into that deceit, but the movement was growing and the movement had their say in the ensuing leadership election. Just like his Islington constituents, the Labour Party membership confirmed their faith in their democratically elected leader.

They tried to brand Corbyn’s supporters as a personality cult, perhaps misreading the enthusiasm of the left for at last finding representation, but more likely not even caring for facts. But the movement grew.

More and more, the demographic of his supporters belied the idea they were all hard-left trotskyists, as grannies and mothers, nurses and teachers and others turned up at rallies, waving placards and adding their voice to the rest.

Early on, the right-wing establishment-led media got on board with the constant smear campaigns. Were it not for social media, their stranglehold on news reporting might have stopped the movement in its tracks. But people could lift the propaganda curtain and peer behind.

People saw videos of tens of thousands marching in London, bringing the city to a standstill, supporting the NHS, challenging the Tories, chanting “Justice for Grenfell!” They saw it and were astounded when it was suppressed by the media – even by our publicly-owned broadcaster, the BBC. The movement grew.

Then came the accusations of antisemitism – a smear proven to have been dreamt up by a right wing cabal who cared far more about toppling Corbyn than about addressing antisemitism.

Indeed, the despicable weaponisation of this sensitive issue demonstrated a total lack of concern for the victims of genuine racism, given how their cheap political stunt would inevitably undermine genuine attempts to address it.

It was a crass move but the right wing believed it was a powerful one – so powerful that they thought they could blatantly discuss the mechanism of their smear, boasting that they would use the weaponisation of antisemitism to topple Corbyn, making no pretence at any other objective.

But once again, they were wrong. People started to see the smears for what they were. People are now seeing them for what they are. The more ridiculous the smears get, the more support Corbyn receives. The right-wing’s much vaunted coup de grace has missed its mark.

1 thought on “The movement grows – join us.”