Jeremy Corbyn had previously found evidence  to the contrary and 451 pages of unredacted documents  have been circulated. Boris Johnson has repeatedly denied that the NHS would be part of any future trade deals. Yet, why did  the Tories and the Liberal Democrats vote against Labour’s amendment to the Queen’s Speech in October which would specifically exclude the NHS from any such deals? See Trumping the NHS.

The Independent reports, (3rd December) that Tory minister Dominic Raab has now admitted the US would be able to ramp up the cost of drugs bought by the NHS after Brexit, but insisted the prospect is “hugely unlikely”.

Asked if Washington would be free to “jack up prices”, the Foreign Secretary replied: “The Americans will take their decisions.”He then claimed: “I think it’s hugely unlikely, why would they do that?” – prompting Sky News interviewer Adam Boulton to say: “To get more money that’s why.” Who would have the upper hand do you think in such a scenario? 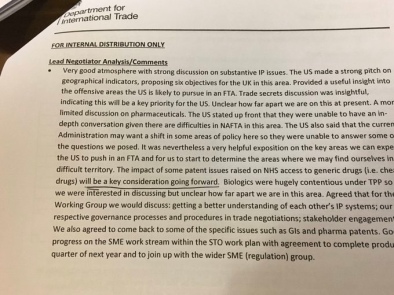 The US has demanded “full market access” in the NHS and is known to want to end the ability of NICE (the National Institute for Health and Care Excellence), which regulates medicine prices in the UK, in order to block drugs it does not consider value for money. Such a trade deal, would therefore give the US carte-blanche to hike the prices for patented drugs.

The Labour Party, have plans to introduce a publicly owned pharmaceutical manufacturer which would make generic drugs at cost price in the UK, providing both good well paid jobs and also good value for the NHS. The Tories have no such plans and continue to work with private high pricing drug companies. See Labour’s document: Medicines for the Many:

Our proposals address the fundamental problems in the current model:

Another area of concern regarding the future of the NHS if the Tories are re-elected, is Matt Hancock (Secretary of State for Heath ) announcement of the intention  in the future for  DNA sequencing of genomes on all new born babies.  Some people have volunteered for genetic testing by private companies such as 23 and me and others., by use of home-kits for family history research. There is an inherent danger in such testing in the case of Insurance Based  health systems, such as that currently in use in the USA.

Matt Hancock’s desire to have databases of the genomes of the entire new born population has ominous implications, in that children born with certain genetics disorders could be denied treatment by the insurance companies.

Rob Delaney  in this video clip describes  the current NHS, as the “pinnacle of human achievement”. Rob Delaney has lived under both the  insurance-based US health system, and the NHS. The NHS is vastly superior. In the clip, he explains how, with insurance based health services, eventually the bills just become too high and patients can ‘drop out’ of health provision.

Other concerns regarding the Tories and Genetics, have eugenic undertones of concern.  Now where does this stand in History?
*Genetics outweighs teaching, Gove adviser tells his boss
Guardian, 2013
*Dominic Cummings, Gove’s advisor, argued that Sure Start centres should be shut as learning is about genetics so it’s a waste spending money educating the poor. Cummings admires E O Wilson, sociobiologist.
* And now Matt Hancock wants the genomes mapped for all newborns so that NHS Insurance companies can deny cover to ‘risky patients’ as in the USA. Reminiscent of who in History?

Regarding the position of Trump’s silver platter, it seems he would not be intersted in wholescale purchase of the NHS,  but very interested in using it for potential profit. In other words,  speculators are only interested in the PROFITABLE side of the NHS like drugs, and  health insurance.
If you are a risk, the insurance companies will turn you away.  If the drugs aere unaffordable, they may not be available for all, and coud be rationed. Trump only wants the juicy bits on his silver platter. This is not the NHS as we know it, and how it was intended when set up. It has become a source of rich pickings, and only the Labour Party have shown a commitment to keep the NHS safe in public hands.

1 thought on “Trump’s Silver Platter and the NHS.”