It has been announced that Tribune Magazine is to close on the 4th November 2011, after 75 years of weekly publication, and at a time when it is needed more than ever!

The media as whole is dominated by right-wing views and analysis. Apart from the Morning Star, there is little other coverage of union or industrial news. Weekly printed presentation of left-wing thought will be dependent on the vagaries of the Guardian, the Mirror and the New Statesman. 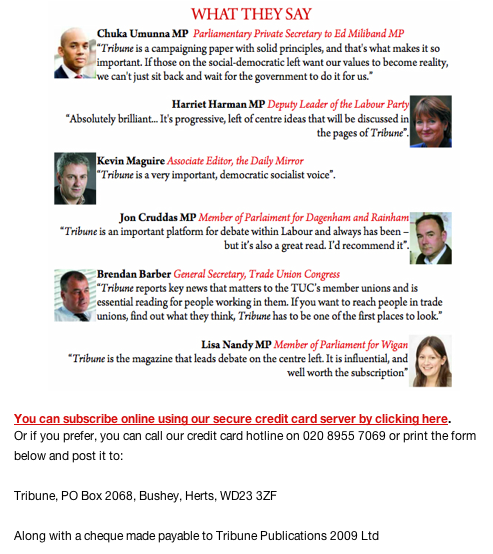 The owner intends to maintain a Tribune website, which will carry automated feeds from other left of centre sources and will require no staff. All six full-time and part-time staff are to be made redundant.

There is, however, a suggestion that the staff may continue to run Tribune as a co-operative, and there is an appeal for short-term donations from readers and supporters on the basis that these funds would be converted into capital in a jointly-owned worker-reader co-op, with representation on a new board. The time frame is extremely short … the deadline is Friday 28th October… So action is needed now to save this invaluable asset.

Mr McGrath, who rescued the paper after a consortium of trade unions relinquished ownership in March 2009, said:

The newspaper format of Tribune has, in a changing world of electronic communications and economics, become unsustainable. We are, however, determined to keep the Tribune brand alive by moving all publication to its web site and through the continued maintenance of the archive of the paper’s 75 years.

This means that the company has safeguarded the history of Tribune and will keep the brand alive through the web site which will run on an automated basis feeding off other left of centre political and arts web sites and will offer immediate, up-to-date news coverage. It is a positive and exciting move into the 21st century.