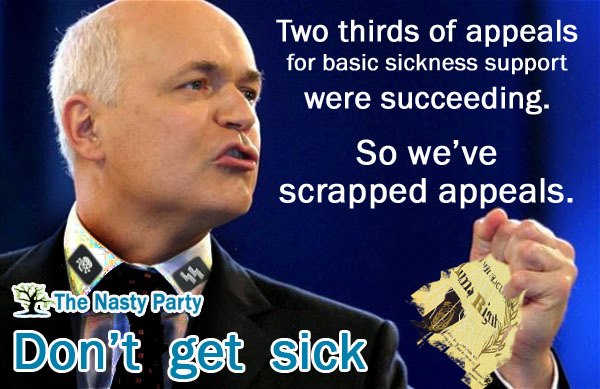 Section 102 and Schedule 11 of the Welfare Reform Act, (Clause 99) – Power to require revision before appeal.

If there is anyone left in doubt that this Government’s policies are grossly unfair, and are punishing the most vulnerable of our citizens, whilst the Tories are claiming that they are benevolent and paternalistic, by utilising Orwellian Newspeak/Doublespeak methodology, you need look no further than Clause 99 for evidence to verify my conjecture. Currently, claimants who are found fit for work can continue to receive Employment Support Allowance (ESA) at the basic rate by immediately lodging an appeal if they think the decision is wrong. ESA will then remain in payment until the appeal is decided.
That is all set to change, however, under Clause 99 of the Welfare Reform Bill, intended to be effective  from April 2013. Under the new rules, claimants who wish to challenge a benefits decision – including ESA and DLA decisions – will no longer be allowed to lodge an appeal immediately. Instead, there will be a mandatory revision or review stage, during which a different Department of Work and Pensions (DWP) decision maker will reconsider the evidence and, if necessary, send for more information, before deciding whether to change the original decision. There will be no time limit on how long this process can take. The requirement for a mandatory review/revision before proceeding with appeal applies to all DWP linked benefits. The ludicrous claim from Government is that this “simplifies” the appeal process, and  ”the changes will improve customer service by encouraging people to submit additional evidence earlier in the process to help improve decision making. Resolving any disputes without the need for an appeal will also help ensure that people receive the right decision earlier in the process.” Call me a cynic, but I don’t believe this is the genuine reasoning behind clause 99 at all.

You will also have to appeal directly to HM Courts and Tribunal Services, this is known as “direct lodgement,” as DWP will no longer lodge the appeal on your behalf. DWP has agreed with the Tribunal Procedure Committee to introduce time limits to stipulate how long DWP has to respond to an individual appeal.  DWP is currently discussing what these time limits might be with the Tribunal Procedure Committee. That is assuming, of course, that  people manage to circumnavigate the other  consequences of this legislation.

From 1 April 2013 you will not be able to get legal aid for First-tier Tribunal hearings. Legal aid will still be available for appeals to the Upper Tribunal and higher courts. See  appealing to the upper tribunal against a first tier tribunal decision here: www.disabilityrightsuk.org/legalaidact.htm for more information.

There are some serious implications and concerns about these changes. Firstly, there is no set time limit for DWP to  undertake and complete the second revision. Secondly, claimants are left with no income at all whilst they await the review, and until appeal. The only choice available seems to be an application for Job Seekers Allowance. (JSA). However, we know that people in situations  where they have been refused ESA have also been refused JSA, incredibly, on the grounds that they are unavailable for work, (and so do not meet the conditions that signing on entails) or they are unfit for work, because they are simply too ill to meet the conditions. We know of people who have had their application for JSA refused because they attend hospital for treatment once a week and so they are “not available for work” at this time.

Furthermore, there is some anecdotal evidence of people being told by DWP that in order to claim JSA, they must first close their original claim for ESA, since it isn’t possible to have two claims for two different benefits open at the same time. DWP are also telling people that this means withdrawing their ESA appeal.

Another grave concern is that although most people on income related ESA are automatically passported  to maximum housing  and council tax benefit, from the time that the claim ends, (and for whatever reason), eligibility to housing benefit and council tax also ends. However, I would urge people in this situation to contact the Housing Benefit office promptly to explain the situation – the DWP automatically contact the Council to tell them when someone’s eligibility for ESA has ended. It is always assumed that the person claiming has found work.

You can still claim for housing benefit and council tax benefit because you have a low income, but you will need bank statements to demonstrate this is true, and also, any other evidence you may have, such as your notification letter from DWP, evidence of your tenancy and ID . I am informed that when an appeal is pending, providing the housing benefit is informed of this, there should be some support towards rent and council tax.  However, this is going to place further strain and difficulty on people who are ill and disabled.

I can confirm that there was no risk analysis or risk register in respect of clause 99 of the Welfare Reform Bill. I sent an FOI to DWP that asked about these issues, together with questioning that Clause 99 contains no reference to a time limit on ESA reconsiderations, although it makes them mandatory. I asked :-

1) When is the intended implementation date?

2) As yet no decisions have been made regarding ESA payment levels
during the reconsideration period which could be indefinite. Can you
give an assurance that this will be announced BEFORE
implementation?

3) What data will you collect so that the effects of this
legislation can be accurately analysed subsequently?

4) Where are the risk assessment, impact analysis and risk register
that show the effect this will have on claimants whose benefit
payments could be affected indefinitely?

The response informed that the planned implementation date is April 2013, and “the DWP will conduct a  formal public consultation in line with the Government’s code of practice on consultation. This does not include publishing a risk register or conducting a risk analysis. This is because all aspects of the proposed changes are considered during the consultation process and in the impact assessment and equality impact assessments related to the changes”. There are no plans to introduce a time limit, or to retain payments of basic rate ESA throughout the second revision and leading up to appeal.

The DWP published consultation document “Mandatory consideration of revision before appeal” that could be accessed via the DWP web site under the heading “Consultations”. The consultation concerned issues relevant to the implementation and operation of the appeals reform provisions in the Welfare Reform Bill and invited comments on the draft regulations. I worked on raising awareness regarding the issues that the Government’s draft raised, as well as prompting and garnering responses to the consultation. I can also confirm that the Government response to the consultation did NOT take into account any of the concerns we raised collectively, in particular, regarding the lack of a time limit on the DWP to produce the mandatory review, and the withdrawal of basic rate ESA to those awaiting the review outcome .

So, the consultation was evidently a sham, nothing more than paying lip service to an increasingly perfunctory democratic process. Given that basic rate ESA is exactly the same amount per week as JSA, we need to ask ourselves why the  Government have withdrawn the ESA safety net for those wanting to appeal DWP decisions that they are fit to work. Why introduce another layer of DWP bureaucracy to the appeal process, and why is it the case that there is need for a second revision, if the first response is based on robust procedure and decision making, and yields accurate and fair outcomes?

Of course we know that the outcomes are neither fair, accurate, or based on robust decision making. We know that some 40% of appeals for ESA were successful in 2011 and that this percentage rose to around 80% when claimants had representation at appeal. That is pretty damning evidence against this Governments’ claims that the system is working, and that many disabled people “can work”.

It’s horrific and true that Clause 99 has been introduced to make appealing wrongful decisions that we are fit for work almost impossible. Sick and disabled people are effectively being silenced by this Government, and the evidence of a brutal, de-humanising, undignified and grossly unfair system of “assessment” is being hidden. More than 10,600 people have died because of the current system, and it is terrifying that our Government have failed to address this. Instead, they have made the system even more brutal, de-humanising and unfair. Clause 99 is simply an introduction of obstructive andKafkaesque bureaucracy to obscure the evidence of this. This Government is oppressive, repressive and certainly bears all of the hallmark characteristics of authoritarianism.

We need to be pressuring for the introduction of a  time limit (on both legal and humanitarian grounds) as currently there is none. I did enquire to see if DWP had any internal rules or guidelines yet regarding a time limit but so far they have not. We also need to be pressuring for basic rate ESA to continue. That was a major part of the consultation response, too.  Meanwhile, legal challenges to this unfair and totally unacceptable addition to the Welfare Reform Bill will be going ahead.

Government’s response to the public consultation

The DWP published a short Mandatory consideration of revision before appeal – Government interim response to public consultation which stated that the Department did not propose to make any significant changes to the draft regulations included in the consultation document as a result of the comments received.

The Government’s final response to the consultation included the following:

The decision maker will still consider whether an any time revision can be made, or whether the decision should be superseded when considering a late application for revision as they do now.

Where a request for reconsideration is made out of time, and the decision maker refuses the application to revise the original decision, the effect of the draft regulations is that there can be no appeal as the Secretary of State must consider whether to revise the decision before an appeal can be made.

From April, you will need to send your GL24  appeal form (DWP leaflet “if you think our decision is wrong” or a letter directly to HM Courts and Tribunal Services.

How to appeal by letter

. The appeal must contain:

Further information will be made available on http://www.gov.uk and DWP

Who is accountable and legally liable for the well-being of those deemed “fit for work”?

Sign the WOW petition – a call for a Cumulative Impact Assessment of all cuts and changes affecting sick & disabled people, their families and carers, and a free vote on repeal of the Welfare Reform Act.

It’s a call for an  immediate end to the Work Capability Assessment, as voted for by the British Medical Association.

Consultation between the Depts of Health & Education to improve support into work for sick & disabled people, and an end to forced work under threat of sanctions for people on disability benefits.

Many thanks to Robert Livingstone for his outstanding art work.