Liberal Conspiracy report ahead of Ed Miliband’s ‘major’ speech on the economy:

‘The Labour leadership is clear about a few things:

The last Labour government mistakenly bought into Thatcher’s neo-liberal framework for the economy, and they need to find a new way that genuinely grows real incomes, provides skilled jobs and is not part of a global race to the bottom.- New Labour were too benign to those at the top and not worried enough about those at the bottom. They recognise their way of distribution did nothing to stem inequality, and that the economy needs fundamental change to stop inequality growing.

“We are taking a shot at the paradigm of the past.”

This sounds very encouraging but as always the caveats will be in the detail.  The Guardian reports Ed Miliband as saying:

“The squeeze on working people started a long time ago. In the figures going back to 1979, the top 1% have got every 24p of every extra £1 that has been earned, and the bottom 50% have got just 15p that has been earned. Even if growth is rising in 2014 and 2015, for most people living standards will remain stuck, and is unlikely to recover for a decade.

“The next Labour government has got to go much further in dealing with the roots of this – that is about productivity and skills, vocational education for the bottom 50%, and the creation of high-wage, high-skill jobs. What I am doing is bringing together the arguments we have made, all of which remain right – cutting too far too fast, helping the squeezed middle and responsible capitalism.”

My problem is with the Labour Party’s assertion ‘cutting too far too fast‘ – why are they still talking about ‘cutting’ when they’ve just said that ‘the last Labour government mistakenly bought into Thatcher’s neo-liberal framework’?

It is George Osborne and the Thatcherite neo-liberal framework that insists, against all reason, that the deficit is about too much government spending … but the graph below tells another story.

The graph shows the relationship between unemployment and the budget deficit/surplus and whether unemployment spikes or recedes, the deficits/surpluses follow the same pattern. 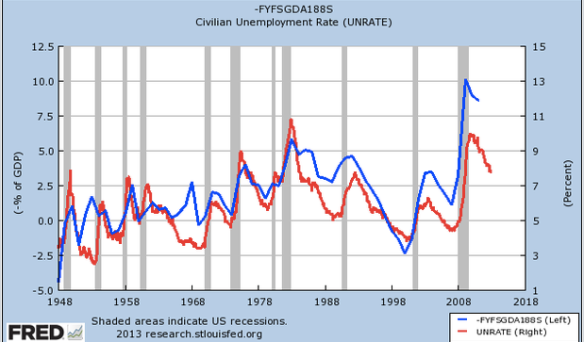 http://www.theatlantic.com/business/archive/2013/02/the-most-important-chart-about-the-deficit-youll-ever-see/273065/
‘Unemployment isn’t just a human disaster. It’s a fiscal one too. Higher unemployment means lower tax revenue, and higher spending [on benefits] — that is, bigger deficits. And that means bringing down unemployment is the only way to bring down the deficit. Trying to slash the deficit during a depression — in other words, a liquidity trap — will only make unemployment worse, and hence leave the deficit little, if at all, better (and perhaps worse). This is hardly a novel insight….John Maynard Keynes said as much all the way back in 1933, when he said policymakers just need to “look after unemployment, and the Budget will look after itself.”

In other words, when employment increases, the deficit decreases so Ed Miliband’s new paradigm should focus on job creation and a jobs guarantee for all of the 8.5m unemployed and underemployed, who are willing and able to take one.  There is only one good cut that Labour needs to make and that is to cut the neoliberal ‘austerity-speak’
The only way to close the budget deficit is to close the jobs deficit.
http://liberalconspiracy.org/2013/02/13/the-most-important-speech-by-ed-miliband-yet-which-almost-everyone-will-ignore/
http://www.guardian.co.uk/politics/2013/feb/14/ed-miliband-speech-economy-tax-policies

6 thoughts on “Ed Miliband wants a new economic paradigm – this graph does just that.”