With great insight, Chris Waller draws the parallels between the state of the Church in the 16th century and the state of contemporary economics (1):

Economics needs its Reformation, not only a new theoretical basis, if one can be found, but more importantly, the financial economy needs to be taken out of the hands of a small and overly powerful clique – a clique which, like the Church of Luther’s day, has been shown to be not only corrupt but criminally incompetent in the very matters in which it claimed to have special insight and expertise. Economics in the twenty-first century is in the grip of the very same mind-set that impeded any possibility of intellectual progress in the 16th century and now stands in need of its Nicholas Copernicus, its Giordano Bruno, its Galileo and its Johannes Kepler.

There are voices out there raised against the current economic orthodoxy but, if history is any guide, those who wield power will do their utmost to stifle anything which they regard as heresy and they will not relinquish that power without a struggle: things will get worse before they get better and the Greek people may well be the actors in what is only the first act of a very modern tragedy. (1)

Furthemore… asks Chris Waller … ‘Even if economics were solidly founded in theory, we are still left with the bigger question: what is the purpose of the application of this theory?’

A point also made by Neil Wilson when he writes ‘Let’s stop chopping people’s feet off to fit the New Procrustean bed.  Let’s make the bed big enough for all of us.’ (2) He also draws a parallel between mainstream economics and a religion:

Under a New-Keynesian economic system there must be suffering so that the purity of the model is maintained. And since this religion fits with the views of those with the money and power, it is funded and propagated. (2)

‘And when the real world throws up endless evidence that the model is utterly wrong, the mainstream economists scream that, no, the world must be forced back into the model. (2)

In the same vein,  Professor Richard Wolff  told Bill Moyers (in the excellent video interview below) that he had to go to a Business school to learn how real world economics works because it wasn’t what was being taught in the elegant equilibrium models of the Economics Department at Harvard or other prestigious Universities.  Professor Steve Keen goes further by saying that there is ‘a paradoxical but transcendental truth’ – Neoclassical economists don’t understand neoclassical economics.

The problems outlined are pretty damning.  We are told that ‘there is no alternative’ (Mrs Thatcher’s TINA) .. and yet it is an economic system which doesn’t predict real world events like the financial crisis in 2008; that the real world throws up endless evidence that the model is utterly wrong; that economics in the twenty-first century is in the grip of the very same mind-set that impeded any possibility of intellectual progress in the 16th century; and that since this theory fits with the views of those with the money and power, it is funded and propagated.  Moreover, a system which doesn’t serve society, is justifying ‘austerity’ policies and leaves ‘Greece effectively stretched on the rack, we have unemployed living in pipes, and the Spanish youth left to wander the streets scratching a living and their heads’.

How is this dire state of affairs possible?

Some of the body of mainstream theory was applicable to the convertible, fixed exchange rate currency systems that were defined under the Bretton Woods system. Under that system, the government was revenue constrained as a result of the link between currency on issue and the stock of gold held by the central bank. As a consequence, the government had to raise taxes and/or borrow from the non-government sector in order to spend…. By the 1960s, a series of what were called “competitive devaluations”…  were made and set up a series of leapfrogging actions among trading rivals. The system collapsed soon afterwards when it became obvious that the US government could not longer support it.

So, at present, the overwhelming perception that the wider society has of economic affairs, options available to government, causalities between economic variables etc is based on a myth. There is mass deception which is propogated by my profession for various reasons.’ (3)

The system is ‘a complex web of inter-related myths’.

But is there only one strand of economic thought or are there different schools?

This useful but far from complete tree was published in (I think) the Washington post: 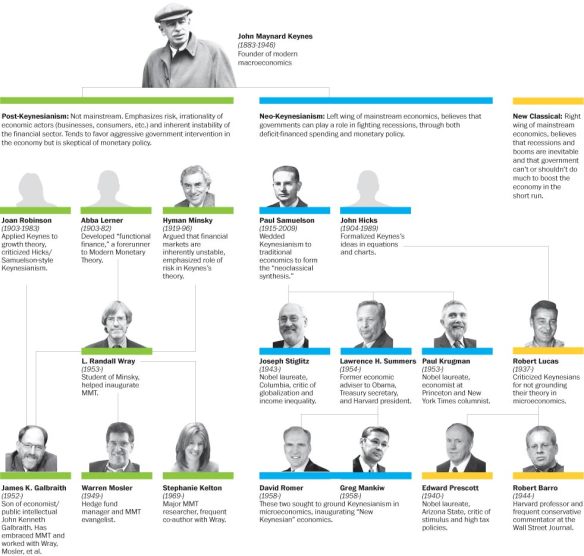 In explaining some of the origins of these approaches, Professor Bill Mitchell writes (3):

‘I have noted in the past that the body of theory we call neo-classical (characterised by marginal analysis) emerged in the fourth quarter of the C19th as a counter to the growing popularity of Marxist thinking and the threat it was posing for the wealthy capitalist class. Industrialists provided funding to economists of the day to develop a theory that would show capitalism to be “fair”. This was the basis of marginal productivity theory, which claims that all rewards taken from the system are in strict proportion to the contribution the recipient makes to the production process.

So wages and profits are alike – each goes to the recipient (worker and capitalist) as a reward for their respective contributions.

Mainstream macroeconomics was built on this microeconomic theory which “proved” that free markets were optimal and self-regulating and that most of society’s ills were the result of government distortions of the market.

The theory has survived despite being internally inconsistent… and lacking predictive capacity.

There are vested interests therefore in preserving a body of theory that promotes, for example, damaging deregulation which has allowed national income to be redistributed to profits and undermines the security of worker entitlements (including their jobs). It is thus not a battle with ignorance but a hegemonic struggle.

However, the elites exploit the ignorance of the majority to maintain these myths.’

Neo –Keynesianism arose out of a synthesis of Neo-classical economics and Keynesianism.  A leading architect is Professor Gregor Mankiw, Professor of Economics at Harvard University, former chairman of the Council of Economic Advisers under President George W. Bush and in 2006, an economic adviser to Mitt Romney and continued during Romney’s 2012 presidential bid.  I think it is pretty safe to say that Mankiw is not a Democrat.  He is also author of the mainstream undergraduate textbook Principles of Economics.

In November 2011, some of the students in his Economics 10 class caused a storm by walking out of his lecture. Their criticism of his course speaks volumes as to the current lack of plurality in economic approaches taught in Universities:

“..we found a course that espouses a specific—and limited—view of economics that we believe perpetuates problematic and inefficient systems of economic inequality in our society today … Economics 10 makes it difficult for subsequent economics courses to teach effectively as it offers only one heavily skewed perspective rather than a solid grounding on which other courses can expand. … Harvard graduates play major roles in the financial institutions and in shaping public policy around the world. If Harvard fails to equip its students with a broad and critical understanding of economics, their actions are likely to harm the global financial system. The last five years of economic turmoil have been proof enough of this.”

As Chris Waller writes, in economics just as in the 16th century church, ‘those who wield power will do their utmost to stifle anything which they regard as heresy’.

However, it is clear that not knowing which economic school, politicians and economic analyses are ‘coming from’ contributes to TINA and the confusing ‘smoke and mirrors’ reported in the MSM.  People are ‘turned off’ by the impenetrable jargon and arcane language…

Professor Stephanie Kelton, another advocate of MMT, has created a shorthand  (as explained by Alittleecon).  There are deficit hawks, deficit doves and deficit owls (4):

The hawks are the austerians who argue government deficits are too high, so we must cut expenditure fast. Government should get out of the way and let the private sector do what it does best. George Osborne and chums are definitely in this category.

The doves argue that the private sector is very weak at the moment, unemployment is high and so we must temporarily increase spending to stimulate the economy. They would agree with the hawks however, that generally, large deficits are bad and so we need a medium term strategy to get the deficit down. Paul Krugman is probably the most famous deficit dove, but over here, economists like Jonathan Portes fall into this category, and also maybe Ed Balls (although he often sounds like a hawk).

The problem for the doves is that their argument is easy to tear down with scaremongering about burdening our grandchildren and Greek-style bankruptcy. Because the doves agree these are medium to long term risks, the hawks win the day because they just use the analogy of government being like a household and having to spend within its means. Most people can relate to this, so while people don’t like austerity, many think there is no other way. (4)

But what about the Modern Monetary Theorists and Post-Keynesians?

They are the deficit owls.  They reject the idea that the government is like a household!  Hence, they argue that we do not need a medium term strategy for getting the deficit down because there is never a risk of the UK government being ‘broke’ and unable to pay its bills. (4)

Richard Wolff (and many others) emphasise that mainstream economics is not working, and does not reflect the real economy.  Furthermore, as Chris Waller (and many others) say ‘the financial economy needs to be taken out of the hands of a small and overly powerful clique’.  These are pretty huge indictments.

In addition, the heretics or the alternative, heterodox economists are ignored or pilloried by the mainstream (although, no burnings at the stake to date) but as Neil Wilson, another deficit owl, says:

We can have jobs for all and sufficient income for all. There is no need for poverty. And very likely without having to ‘tax the rich’ either. So we all win.

If the ‘alternative economics’ was good enough for Roosevelt, Keynes and Lincoln, it makes sense to start listening to the heretics.  Can’t quite picture Ed Miliband as Henry VIII though…

Even as President Obama’s talking points champion the middle class and condemn how our economy caters to the very rich, modern American capitalism is a story of continued inequality and hardship. Even a modest increase in the minimum wage — as suggested by the president — faces opposition from those who seem to show allegiance first and foremost to America’s wealthy and powerful.

Yet some aren’t just wringing their hands about our economic crisis; they’re fighting back. Economist Richard Wolff joins Bill to shine light on the disaster left behind in capitalism’s wake, and to discuss the fight for economic justice, including a fair minimum wage. A Professor of Economics Emeritus at the University of Massachusetts, and currently Visiting Professor in the Graduate Program in International Affairs of the New School, Wolff has written many books on the effects of rampant capitalism, including Capitalism Hits the Fan: The Global Economic Meltdown and What to Do About It.

5 thoughts on “Economics in crisis – it needs a ‘Reformation’”