(1:12 Initiative for Fair Play poster via Facebook) Corporate ‘fat cats’ in Switzerland are pouring in money to sway the result of an upcoming referendum that could turn the tide on income inequality in the country. 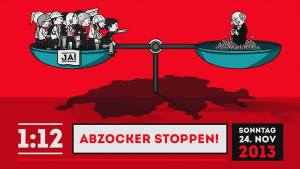 The initiative, introduced by the youth wing of Switzerland’s Socialist Party (JUSO) and backed by the Social Democrat and Green parties and unions across the country, gained support and momentum very quickly, with a successful petition drive of over 130,000 signatures to get it on the ballot.

Rising income inequality in the county has fueled the support. As JUSO’s campaign has pointed out, the average salary among Swiss CEOs compared to the average wage has risen from six to one in 1984 to 43 to one in 2011.

But as voting time has drawn closer, the super rich have turned up the heat against the campaign to protect their profits, Sam Pizzigati at Inequality.org reports, with donations to the ‘no’ vote camp now likely well into the millions and up to 50 times the amount donated to the ‘yes’ campaign.

The spending seems to be taking its toll. A recent poll taken by the Swiss market research institute gfs.bern showed 36 percent of those questioned were in favor of the 1:12 initiative, down from 44 percent in October when the polls were split.

As Pizzigati writes, the messages coming from Swiss corporations such as Nestle and Novartis, as well as many corporate friendly lawmakers, have painted the picture that the initiative is “a frontal attack on freedom” — and “prosperity,” as declared by SwissHoldings, a federation of Swiss-based multinationals.

In another sampling of the rhetoric coming from the no campaign, Swiss lawmaker Ruedi Noser said the 1:12 proposition would turn Switzerland into the “North Korea of Europe.”

The fear-inducing tactics seem to be working, if the polls are any indication.

However, the game is far too early to call, Pizzigati notes. In a very similar showdown earlier this year, “Swiss corporate execs unleashed a similar political blitz,” he reports, “when corporate gadfly Thomas Minder, a successful entrepreneur, led a campaign to give shareholders more say over top executive pay — and ban executive new-hire and ‘golden parachute’ bonuses.” That initiative passed with an overwhelming 67.9 percent voting against the “fat cats” in favor of the regulations.

“I’m optimistic,” said JUSO’s David Roth in an interview last week. “We have our chance. We’re up against the big companies who spend millions. I can tell you that our opponents are nervous.”

This work is licensed under a Creative Commons Attribution-Share Alike 3.0 License.