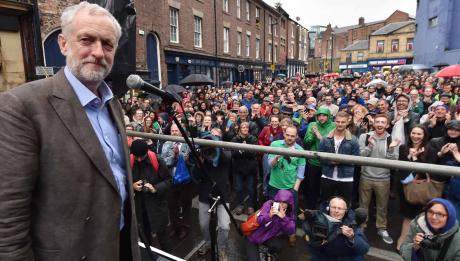 When the stakes are high, voices on both sides will be raised in anger. Those who long for a quiet life will not find it during such times of turmoil. This has always been one of the trump cards played by those in power. They play upon the fears and anxieties of the public in order to hang onto their position. ‘Don’t go out into the streets’ they say – ‘someone might get hurt.’

Unfortunately, a great deal of  recent commentary on  Labour Party debates (particularly this) stands in precisely this tradition of casual conservatism. A handful of aggressive incidents have been reported endlessly, focused on by commentators who really should know better as if they were the only story. In other cases, incidents have been more or less fabricated entirely by news sources sympathetic to Labour’s right wing. Just this week, the BBC itself has been forced to admit that its reporting of an entirely peaceful, female-led demonstration in Walthamstow a few months ago was grossly misreported along just these lines.

Labour has seen an unprecedented influx of new members over the past 18 months – a surge of democratic interest unparalleled in our nation’s recent history. From this movement, a new organisation has also emerged which has tried to channel some of the energy generated by the campaign for Jeremy Corbyn’s leadership to positive ends. Those ends are not revolutionary or even particularly radical: Momentum is simply trying to give a voice to a body of opinion which has been widespread throughout the country for many years, but has been denied any kind of place in our public life since the early days of New Labour. It is a body of opinion which believes, with good reason, that the embrace of neoliberal economics and neoconservative foreign policy under Blair was a disaster, and that it was enabled by the evisceration of party democracy by a small elite who took control of policy-making, media-messaging, and the selection of parliamentary candidates. It proposes that it would be better for all of us if Labour party members had more say over policy and more say over who represents us in parliament. Beyond this, Momentum seeks to give a voice to the many UK citizens who do not belong to any political party but who believe that the country desperately needs to take a different road from the one it has been travelling since the end of the 1970s: a road which has led to the disenfranchisement of the post-industrial North and the national tragedy of Brexit. Naturally some of those voices, suppressed for so long, sound raucous, aggressive and uncouth.

Of course, to those who take a different political view, this is a threatening development. Everybody would prefer that those who disagree with them politically do not organise, do not hold meetings, do not seek to positions of influence within their organisation. Of course they would. That doesn’t mean that the people doing so are doing anything wrong. That’s just what democracy looks like.

But the fact that Momentum has successfully established 150 local groups up and down the country, and that its first major public campaign was a simple drive for voter registration, has hardly been reported at all. Instead a tiny number of incidents at Labour events – most of which seem to amount to somebody getting shouted at in a fractious public meeting – have been turned into the whole story of this remarkable new democratic movement.

Well, any student of political history knows that we have been here before. “Mob”, “rabble”, “ruffians”, “seditionists”: this is what they said about the Chartists, about the suffragists and suffragettes, about the enemies of slavery. People got shouted at in their meetings too. It probably wasn’t always pretty. But it is what democracy looks like.

There is absolutely no justification for any of the personalised hostility that has been directed at individuals, especially women, during these developments. Those responsible have been rightly deplored from all sides. But there is also no justification for the journalistic focus on these incidents to the exclusion of any real account of what Momentum is, who it represents, where it has come from, and what it is doing. I do not condone, and we should all entirely condemn, all and any personalised attacks on those journalists and commentators who have reproduced this narrative. They are just doing what so many people in their position before have done. But they should know that they stand in a fine old tradition of reaction.

Anyone looking at these developments from a global perspective can see something very clearly.  Everywhere we look, people are hoping for change. Around the world they have taken to the streets and the squares, they have formed new parties, they have made new alliances, they have stood up and said ‘enough’. Enough of the yawning gap between rich and poor growing wider every year. Enough of wealthy elites deciding how the rest of us should live. Enough of governments of left and right the world over always doing exactly the same thing: privatising public services, cutting taxes for the rich, letting the poor get poorer.

And now, at last, it is happening here – in a very British way. Many of us may be still surprised that our version of this global uprising is taking its current form. We might have been expecting a new party or a different sort of movement. But this is what is happening here and now. This is our Podemos.  For those of us who believe in democracy, the Labour membership surge and the arrival of Momentum amount to a once-in-a-lifetime opportunity. This is our chance to carry forward both the hopes and the anger of recent years into a new era of democratic politics and social equality. We can join in with this movement and try to make it better than it already is; or we can stand on the sidelines wringing our hands, because it isn’t exactly the way that we would like it to be. We may wish there were another choice – but wishing will not make it so.

This article is published under a Creative Commons Attribution-NonCommercial 4.0 International licence.

1 thought on “Is Momentum a mob? No – this is what democracy looks like”