Health and Safety Legislation is not ‘Red Tape’ – or unnecessary bureaucracy as David Cameron has claimed, as he boasted he intended to remove it. Removal of vital health and safety legislation, cuts to public funding and an inability to keep building regulations were factors leading to the Grenfell fire which shocked so many of us. But for that awful tragedy, many of us would still be unaware of the risks caused by ‘Red Tape’. It is imperative that professional expert advice and adequate funding is made available for public buildings, homes and workplaces to be safe.

Now is not the time for complacency. The biggest killer in the workplace is asbestos.

In June, Unite reported that the Conservative Brexit negotiations could put the safety of children, workers and parents at risk of mesothelioma as a result of weakening of health and safety legislation.

Unite, the UK’s largest union, has revealed that newly appointed Brexit minister Steve Baker MP, has lobbied the government to weaken asbestos laws. Unite is demanding that the government now provide ‘cast-iron guarantees’ that asbestos regulations won’t be watered down.

Much of the existing legislation, which bans the use of asbestos and controls how the substance is removed, is governed by European Union legislation. Mr Baker’s appointment raises concerns that when the so-called ‘Great Reform Bill’ becomes law, he will be able to use his position to weaken asbestos laws, bypassing effective parliamentary scrutiny.

The three main types of asbestos – blue, brown and white asbestos – can still be found in the workplace. There is no safe level of exposure and all types are dangerous. (TUC guidelines) Unison provide a useful Q and A information  sheet, available here. 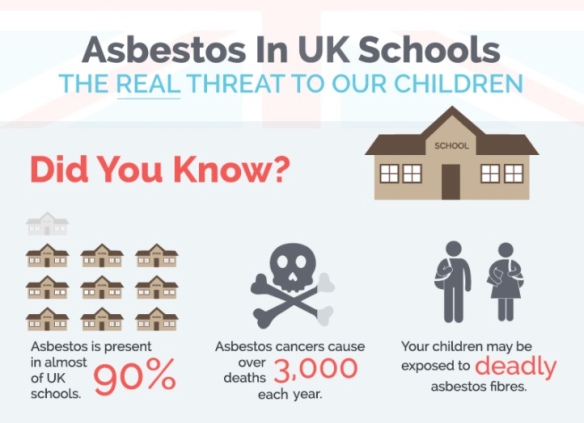 Widespread use of asbestos in schools, and the failure for this to be removed because of poorly maintained buildings and underfunding over decades now leaves a crisis and more lives at risk.

Earlier this year the NUT invited members to complete an on-line survey for management of asbestos. The NUT Asbestos Survey Report is shown here. Not everyone responded to the survey, but there is overwhelming support  calling for the government to commit to a phased removal of asbestos from schools.

Management of inspections in schools must be informed, comprehensive and safe. One teacher in the UK is dying each month. The video clip demonstrates the NUT questionnaire was inadequate, referring to inspections in SE England.  In the SE only a handful were inspected, and there were problems in all.

The information here collates UK schools which contain asbestos, but this is not complete, but shows the scale of the problem as 86% of schools in this study contact asbestos. This does not mean other schools are safe.

As there is a mass academisation of schools as they move away from Local Authority Control, there is a concern that expert advice and knowledge is not at hand leaving schools isolated. Furthermore cuts to funding, involvement in private companies with conflicting interests adds to concerns. There is no place for competition between schools who strive to make profits for Academy chains.

We need transparency about asbestos in our schools and public buildings. This is a very grave and dangerous issue. The DfE has said that  legislation “does not require schools to inform parents about the presence of asbestos in their children’s school.”

The Labour Party Manifesto makes plans for increased funding in schools, while redressing the historical underfunding in some schools and will invest in new schools, including the phased removal of asbestos in existing schools. All schools will be democratically accountable including appropriate controls to ensure they serve the public interest.

The Labour Party Manifesto rejects the “Great Repeal Bill”, replacing it with an EU Rights and Protections Bill that will ensure there is no detrimental change to workers’ rights, equality law, consumer rights or environmental protections as a result of Brexit.