I totally agree with Jan Cawser’s comments in reflecting how post-war socialism transformed the lives in peacetime of many people, who are now aged 65 and over. Many of us, and I am one, came from working class families with a history of struggle and poverty in generations that had gone before us.

The Labour Party transformed my life and I want the same for my grandchildren. When our parents’ generation came back from the war, with the “Spirit of ’45 ’ they set about to build a new society. ‘The Spirit of ’45’ transformed the lives of what became known as the ‘baby boomer generation ’ as soldiers returning from war, and the peace resulted in a sharp rise in birth-rate. They wanted a future which was not just for the benefit of the rich and the elite, but ordinary working people like them. Our parents were happy to see real change knowing that our futures would not be like their pasts.

We had opportunities never seen before in our families. They gave us the NHS and the welfare state. There were university grants for going to university, and council mortgages for buying homes, and investment in all aspects of society. We preached freedom and peace and love, and flower-power, and it was so good to be young and alive. 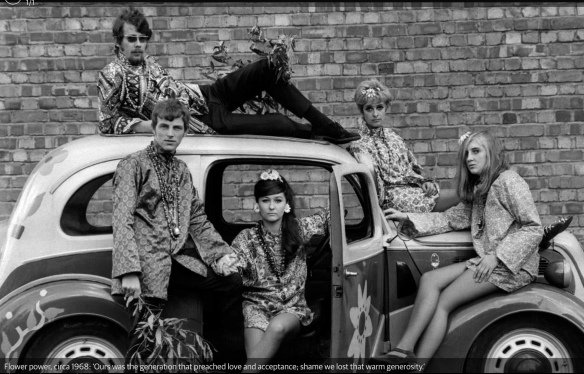 Young people today have far fewer opportunities and many young people have little chance of ever owning a home, and high rents are barely covered by wages. Going to university, now there are no longer maintenance grants and £9,000 a year in tuition fees, is no longer an option for many with promising skills and talents. Neither are apprenticeships as available today. This has resulted from Tories chipping away at the welfare state, mass privatisation and selling off public assets. Margaret Thatcher said, “There’s no such thing as society.” That didn’t stop society being there, as neighbours will help one another out, but it absolved the government of any social responsibility.

Some young people feel resentment, and that is understandable as Sonia Sodha comments. “If you want to know what generational guilt feels like, try giving a careers talk about getting into an industry in which jobs are steadily shrinking. It’s a difficult balance between providing encouragement to the next generation of journalists, whom the world will need more than ever, and being honest that there are no longer as many routes through the door as there were for my generation, let alone the one above me.”

“Yes, that’s me, one of those over-65 baby boomers (“Enough of Gen Z’s sorry generation game. ) Get the boomers onside”.

I cannot for the life of me understand why my peer group do not realise how lucky they were.

I come from a working-class background, but I grew up with the closest we’ve ever got to equal opportunities in education, grants for university, work available with strong unions that enabled us to have decent sickness and holiday pay. I inherited nothing but could afford to get on the property ladder. I have a pension that allows me to keep warm and eat. I have the health and wherewithal to help my children and enjoy my retirement.

I actually heard an older lady tell me that we’ll be all right out of the EU because we survived the war. I was too polite to point out that we didn’t, it was our parents’ generation. Our parents, who worked hard and elected governments that gave us the welfare state, more personal freedom to live the lives we chose.

How can we not want that for our children and grandchildren? The country was broke in 1945 but investment and planning built thousands of homes and created work. Austerity doesn’t work. Giving people a chance does. I am delighted to see the Labour party produce a manifesto that plans for the future, doesn’t just chuck a bit of money as a sticking plaster over massive problems.

All I hear is criticisms of politicians and I just want to scream, “then get involved”. Read more, think about the long-term future. We have to stop thinking we know it all and listen to the younger generation. Surely they deserve the opportunities we had. Ours was the generation that preached love and acceptance; it’s a shame we lost that warm generosity.”

Young people are getting involved. Many of them have been inspired by Greta Thunberg and the Climate Revolution. Many have joined the Labour Party inspired by Jeremy Corbyn and the radical election manifesto.

‘Some young Jewish activists are enthusiastically campaigning in Boris Johnson’s seat for the Labour Party.’

It’s their time. It’s their future. So, fellow Baby Boomers, as our parents and grandparents made sure our lives were transformed, so now let’s get behind and encourage the young people, and give them hope. In the spirit of ’45 and that of John Lennon, ‘give youth a chance.’