The Decline of Manufacturing

The manufacturing sector in the United Kingdom has been in visible decline for a large number of years. Below is a chart of the GVA (Gross Value Added) of manufacturing in the UK economy, both actual and at 2008 prices, and the percentage contribution to the whole UK economy:

This decline in the UK has been matched by employment with the sector: 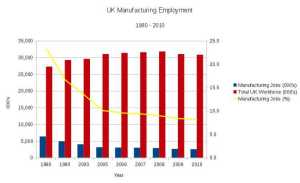 The decline in manufacturing occurred when neo-liberal economic policies were enacted by the Conservatives in 1979. UK manufacturing was already struggling to be competitive then, and the monetarist squeeze strangled the life out of it.

The UK economy then grew a much larger service and financial sector, leaving manufacturing behind.

This step change had a profound impact in different regions. Areas like the West Midlands, always a cornerstone of UK manufacturing, suffered serious structural long term unemployment. At the same time the growth in the financial sector and services concentrated in the South East. This was the background to the divided nation that was present through the Thatcher years.

From Thatcher, to Major and to Blair, this was the path that was chosen. New Labour did not see any value in reviving manufacturing – instead it trod the same path.

The western world gorged on cheap credit, fuelling a housing bubble. The profits from the fast-growing sectors in the UK were spent on supporting manufacturers in other countries, importing consumer goods. This created major balance of payments issues.

When the credit crunch collapsed the house of cards that was the banking system, the money ran out. The balance sheets of the financial sector plunged into the red. The tax revenues that Government relied on dried up.

Why Manufacturing Needs to be Revived

Since the fall of the banking system, the developed world is shaping into two blocks:

China, Brazil and India are all going through a period of rapid growth. As these countries develop further, they will need to plough billions into buildings roads, power stations, railway systems – the infrastructure that an advanced economy relies on.

As the global environment comes under more pressure, there will be a massive market for green technology in all countries.

All this means that the outlook for high quality, technologically advanced manufacturers is very good.

However, the market for basic manufacturing is a poor prospect for advanced nations. The natural cost benefits of producing in low wage economies around the globe simply means that a UK factory cannot compete with a counterpart in Indonesia.

This manufacturing not only boosts GDP when domestic growth is slow, it also creates jobs. Manufacturing is intensive on Labour. Every factory supports many jobs in the local economy – suppliers, specialist contractors and even the local sandwich shop and newsagent.

Good manufacturers offer jobs that are well paid, and can provide a route for young people through apprenticeship schemes.

This panacea of high technology manufacturing is made difficult in the UK for a number of reasons:

The lack of investment

The UK lags behind most other G7 countries when measured by Gross Domestic Expenditure on Research and Development:

This lack of investment means the UK are behind of the curve of new innovation. Japan, Germany and the US all lead the UK dramatically.

Another aspect is the lack of support from banks and the Government. During the financial crisis many small and medium enterprises (SMEs) complained at the lack of  financial help. By comparison, in Germany the Government helped to subsidise the wages of workers moved to short term, part time contracts. This allowed companies to retain skilled labour during a lean spell. Japanese car companies in the UK allowed workers to take extended leave while being paid to minimise redundancies.

Too many manufacturers have a lack of skills at a senior level. This results in managing their workforce in an old fashioned way, that does not foster the environment required for continuous improvement, innovation and creativity. Leading in manufacturing means having senior management skilled in change management, lean and other methodologies.

Low Skills Base in the Workforce

The UK has too many people with no qualifications or out of date qualifications. Here is the data for the skills of the workforce in the UK:

I have personal experience of situations where due to a large minority of the workforce having low numeracy and literacy skills, further training and development becomes impossible.

The relationship between management and the shop-floor can be poor, lacking trust in each other. This can lead to a demotivated workforce, more unwilling to change work practices.

During a time with a previous employer, a plan to change the way boxes were filled with product was devised, and it could have reduced storage space and logistics movements by around 25%. The senior management loved the plan, yet the workforce fearing it would lead to redundancies, were reluctant to support it. This demonstrated the lack of trust.

When selling technical products abroad, additional requirements come into play. These include:

Many smaller companies do not have a large enough workforce to meet these often bureaucratic requirements. Compliance to ISO standards, for example, requires dedicated staff or expensive consultants.

A Plan to Revive Manufacturing