We assess the comfort of restaurants and hotels with stars. We measure temperature in degrees Celsius, or in degrees Kelvin. All of these measurements are arbitrary. How do we measure children? Do we measure them by their foot size, their height, by the colour of their eyes? Or do we just value them for what they are, treasure and develop their skills and guide them to a successful niche in society and a rewarding life?

We have become obsessed by measurements of children and young people.  We use a standardised scale, degrees if you like. We publish their score in the papers, on the TV, and it seems judge them, their schools and even assess their teachers’ pay by these scores.

Why is it that I have observed schools entering 16 year olds for up to 16 GCSEs, which is twice the number of GCE “O” Levels I sat at their age and which was deemed adequate?

Why do children become fearful of schools because they cannot keep up with the pressure, and hide at home?

Why do schools say, “Every one of our Key Stage 4 pupils do GCSEs?” That must seem a daunting task to a child who cannot read at all.

All this is a direct consequence , of SATs, and of League Tables. When I was young no one knew when “O”Level results were released, yet these days the hype is well known. There is so much at stake some schools even use their students to tempt the media to film their school. (6)

League Tables were created in 1992 by John Major’s Conservative government as part of the Citizen’s Charter. They were brought in, presumably in the belief that they would raise educational standards, and for transparency.  Unfortunately, subsequent New Labour governments continued with them, and became obsessed with targets related to them, and the curriculum was tailored to suit them, teachers’ methods revolved around them, schools became competitive because of them, but everyone seemed to forget about the child.

I agree with Harriet Blackburn in 2010 (1) who blames school league tables for the failure of the education system. She writes:

The education system in this country is creating a generation of children who are unable to think for themselves. Since the introduction of league tables in 1992, there has been a shift in priorities in schools away from traditional teaching methods towards teaching exam tactics to help schools to advance up the league table rankings.

League tables were created to try to give parents the information that would allow the forming of a free market within education and school choice. However, this objective was never achieved. Instead, the tables have given the government greater scope to intervene in schooling by the introduction of various target and policies. As a result, not only has the quality of education decreased, but the league tables themselves have ceased to represent the actual relative quality of schools.

The league tables resulted in the deprofessionalism of teachers. No longer was it the responsibility of a teacher to assess the needs of a child.

In 2007 (3) the BBC reported how league tables became something professional teachers would fear, and so teaching to the targets became the norm seemingly ignoring the needs of the child completely.

The stated aim was to give parents the consumer information they needed to create a free market in school choice. Since then though, governments have found another purpose for the tables, using them as a lever to direct the school system down one particular track or another. They have become the Fat Controller’s equivalent of the railway signal box. More focus on the 3Rs! Quick pull the Maths and English lever. Worried about “coasting” schools. Throw the value-added switch .The rise of the annual performance tables has been synonymous with greater central direction over schools. It has proved as powerful a weapon of control as the medieval thumbscrew. The terrified victims have complained and moaned and have rushed to comply.

The targets become meaningless. Desperate students who see the exam system as a life-line will go to extremes to achieve a university place.  Michael Meacher, in the Guardian reports how some students may take extreme measures which seem to be quite unreasonable and unnecessary in order to overcome competition. Such demands will undoubtedly have detrimental effects on young people’s mental health. Many young people find the pressures so severe that they opt out of the system altogether, exhibiting EBSR* .

Rhiannon Brooksbank-Jones, 19, from Nottingham, has such a passion for Korean that she had a tongue operation to allow her to pronounce L the Korean way. She got the grades that will get her into Sheffield to do Korean studies and business management. Eleanor Davidson, from Birmingham (I think she attended David Willetts‘s old school), got eight A* A-levels – no, that’s not a misprint – and will read maths at Oxford.

Another precocious youth, Wajih Ahmed, who is now 13, clocked up another A this year to add to his existing stock of two As. Mohammed Said Noor, a 19-year-old refugee from Iraq who couldn’t speak any English in 2007, got into Cambridge from a state school to read medicine so that he can help people like his disabled brother.

For those students who are successful in the exam system, the Coalition’s policies of increasing University Tuition fees in England, and also cuts to youth services, careers advice, and abolition of the EMA support grant in England may well lead more young people to reject further study because they simply cannot afford further study. (9)

Education  for education’s sake is a wonderful thing; expanding knowledge should be a life-long experience, enriching our lives, keeping our brains active and warding off Alzheimer’s perhaps. But also, we need skills in the workplace. We need citizens equipped for a modern world. With successive governments of all colours pursuing Neo-Liberalism, resulting in the gap between rich and poor becoming  forever greater, we need a reindustrialised nation to put people back to work and wealth redistributed fairly.

We need less dependence on imports. Think Left has reported on the decline of the UK’s manufacturing industry and deskilling of the workforce nation consider a Labour government must review the qualification system to reflect the needs of the nation, to develop policies to solve the problem of areas of deprivation and unemployment, to solve the problem of a broken education system.  The Guardian has  reported how the  Coalition are devaluing vocational qualifications. (7) Vocational qualifications provide our citizens with many skills which will lead to recovery and a fully-skilled workforce should be one aim of our education system, as well as equipping citizens with academic knowledge appropriate for university study and research.

The single GCSE qualification replaced both the GCE “O’ Level and the CSE grade. I welcomed its introduction at the time, as it allowed greater opportunities for many children who were less academic. Initially, the average Grade at GCSE used to be around a Grade D. A Grade G is a pass at GCSE. However, the perception by the public, and indeed, by employers has become that only A-Cs are regarded as a pass and anything else is failure. And so children understand pretty soon that everyone knows what they can’t do. League Tables created more problems within education. The prospects for children leaving school without any qualifications are bleak. In some areas this amounts to almost 50% of school leavers.

The Guardian Article  (2) in 2006, under a Labour government reported the hopelessness individuals feel, and that the school system was letting them down:

Adam, 17, has had just one job in the past three years, packing CDs for £3.07 an hour. After having to cope with sustained disruption at home, which affected his behaviour and attendance at school, he was permanently excluded at the age of 14, and disappeared from the education system without a single GCSE to his name.

Adam feels deeply let down. He says no effort was made to support him at school and knows that his prospects for future employment have been blighted. He’s not alone. Amid the annual hullabaloo surrounding ever-better GCSE and A-level grades, an untrumpeted 5% of school leavers, or just over 30,000 young people, will emerge from the education system with no qualifications at all.

Periods of unemployment, often the prospect of a life on benefits, without hope, perhaps tempted by drugs, and crime may be the result. It was reported in August 2011 that the % of young people out of work, and not in employment or training (NEETS) is at the highest for the second quarter for five years, as reported by the BBC (8). Against the background of riots today, we should be reflecting what we expect of our education system, which has let so many people down. A life with no self respect. The self-image held by a child often leads to a life of poverty for a whole family. It should not be that way.

It is time to change around the topsy-turvy education system that is the result of League-Table-Led initiatives.

Labour needs to implement a revolutionary restructuring of the qualification pathway. There should be a range  of different types of qualifications from which to choose, according to the needs of learners, and at a pace which suits learners.  A qualification which motivates the learner, and  results in real skill acquisition and into employment. Furthermore the qualification network should continue to be available as a right to all citizens throughout their lives. On-line learning, apprenticeships, sandwich courses leading to guaranteed employment, Open University degrees should all be part of an inclusive life-long education experience.

Assessment methods should not just be confined to traditional examinations, which really do not suit all learners. Indeed, the very timing of the GCSEs coinciding with experiences and difficulties, which may be traumatic to the adolescent, needs to be flexible and based on the needs of the child and not the convenience of the school. Modular study, workbased learning, all should have a place within the new qualification framework.

I would like to see a complete refocus of the qualification structure so that it results in re-skilling the nation, improving employment prospects, whilst ensuring our children are learning how to learn, find pleasure in the discovery of knowledge, so motivating a lifetime love of learning. Our children are not commodities being delivered to the nation from a conveyor belt. They are individuals, with differing gifts and talents. They are our future, and it makes sense to develop the skills and talents,  to rejoice in that diversity, rather than aim for a homogenised education system resulting in some highly qualified graduates that cannot get jobs, and an underclass of uneducated, unmotivated individuals who feel a failure and have no hope.

I propose League tables and SATS are abolished, and we  should consider the introduction of a renewed qualification pathway. 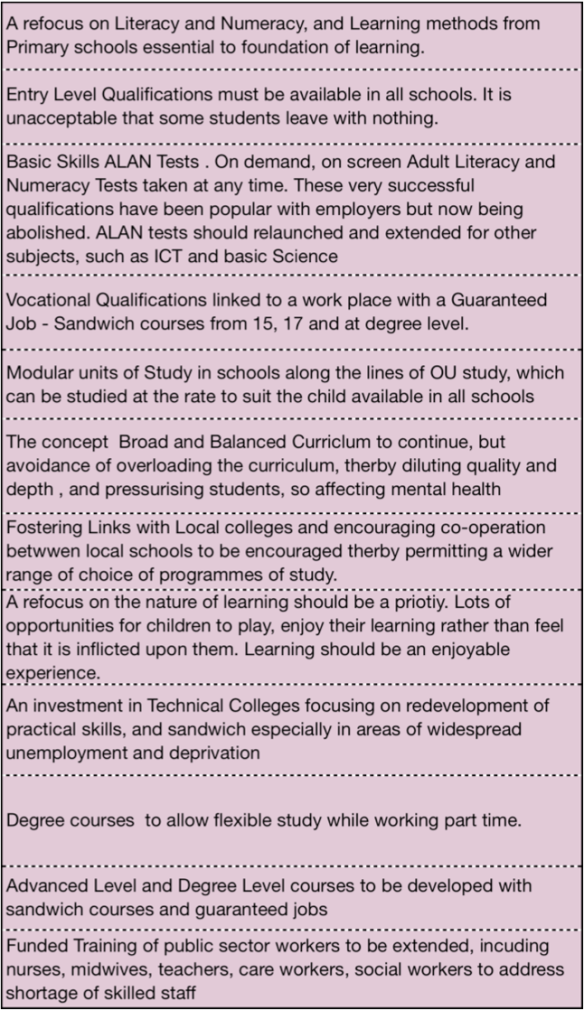 1. The perverse incentives of League Tables by Harriet Blackburn, October 2010

5. “A Level results brilliant, but what about the failures?” Michael Meacher, August 2011

5 thoughts on “What Price Failure?”