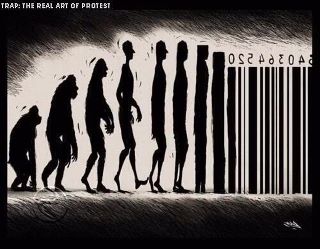 Homo Sapiens – What have we become as a species? No longer programmed for survival of our species, we appear to be about to self-destruct.

No longer do we prioritise protection of our young, our water, our food or shelter, as living species generally do.  We have evolved into something else, which isn’t quite alive at all. We are no longer autonomous beings.

We are products, or a commodities, which cannot think, but rather exist merely to make profit, remotely controlled by the very, very rich from some place we are unaware of.

How much longer can be tolerate this mundane existence? Now is the time for change.  But how?

THE ARAB SPRING  brought about governmental changes for Tunisia, Egypt and for Libya, amid demonstrations across North Africa and the Middle East. Whether these changes will have fair and democratic results, and achieve recapitalization of the people with health, wealth and happiness for real people remains to be seen.  The instigation of a no-fly zone by the United Nations bore little resemblance to the airstrikes and drones from the US led onslaught. What support was offered to those areas where there is no oil for pickings? See Libya: Into Economic tyranny

“We stand in solidarity with the global oppressed and and we call for an end to the actions of our government and others causing this oppression.

The arab people have since this winter been an incredible inspiration to resistance movements all over the world. We stand in solidarity with our Egyptian sisters and brothers and we:

The Independent reports that the riots were considered by the Cabinet Office to be a “moment of madness”.

The opportunity to “get free stuff” and the chance to get back at police were the other two big motivations, according to the report, “The August riots in England”, from the National Centre for Social Research.

Researchers identified peer pressure, the sight of other people getting away with breaking the law, boredom and acting as part of a group instead of thinking for themselves as factors in nudging people to take part.

It seems to me that they have missed the point.  Riots do not happen without reason. The balance of civilisation depends on all those in society belonging to it, not owned by it. While the government chooses to ignore the causes, others take it seriously, and wisely so. (See  Empire of Things  and Riots, Behaviouralism and Neoliberalism.)

THE REBELLIOUS  AUTUMN began with The Occupy Protests, showing hope that there was to be an awakening to consciousness.

Some in the Church considered their consciences, but the events at St Pauls showed that the Church are not willing to risk their comfortable status by standing with the protestors. Some of them called out, “What would Jesus do?”

The ignorance of the authorities is clear by their response to student protests in November which have been met by over-policing.

Thousands of students and demonstrators marched through London to protest against tuition fees and the “privatisation” of the higher education systemon Wednesday, flanked by a huge police presence determined to ensure the violent scenes that erupted last year were not repeated.

Fulfilling their promise of “total policing”, 4,000 officers took to the streets as Metropolitan police commanders blocked off large areas of the capital, bringing in dozens of mounted officers and blocking off roads with 10ft high barricades.

Protesters from the Occupy movement – which has been at St Paul’s Cathedral since mid-October – set up camp in Trafalgar Square with the aim of remaining until the mass strike of 30 November. They were quickly moved on by police, who also announced “additional conditions” for the march after it had begun.

On November 30th 2011, three million public sector workers in Britain will strike over the government’s attacks on their pensions. The establishment needs to start listening. They cannot turn a blind eye, or act like ostriches. This coordinated strike action represents the biggest strike movement since the general strike in 1926. To all intents and purposes it will be a 24-hour public sector general strike.

With a National Strike by 3 million trade union members against pension reforms expected on November 30th, is the government going to show they are listening? Or are they powerless like Italy and Greece, so it makes no difference?

Michael Meacher writes ” So the honest and decent Papandreou is forced out because he wanted to give the Greek people, who would bear the weight of the cutbacks, a chance to express whether they accepted them, however reluctantly, or whether they would take the alternative option of a default and leaving the euro.   The corrupt and despicable Berlusconi is forced out because he cannot lever his own parties in Parliament to force through the cutbacks demanded by the bond markets, without the Italian people being granted any say-so in the matter at all.   Democracy in the EU is now virtually a dead letter.   It was always precarious: neither the Council of Ministers nor the Commission are directly elected.   Now what has been highlighted is that when it comes to the really big decisions neither the European Parliament nor the peoples of Europe have any say in them at all. “

All  seems to have become overshadowed by the Euro zone crisis has seen political leaders with no real power in any case, pushed from office.

Are we now looking at the people reclaiming their rights patiently by Evolution, or bloody and violently by Revolution? Will it be mutation or mutiny? What discontent do we face this winter and beyond?

I believe that we can bring about change, but only by standing together, side-by-side. Solidarity, like Socialism were words to be whispered ashamedly during the eighties but they now are meaningful and acceptable once again.

We will not achieve change by division, but by solidarity. I believe The Labour Party is the only Party, which can challenge the status quo – the Conservative Party will not do this – The Liberal Democrats have shown no intention in challenging the neo-liberalist consensus. Socialist Labour must lead the way.

Ed Miliband has described the Occupy London protest and others across the world as a ‘wake-up call’ and a symptom of a wider crisis caused by Eurozone turmoil, record unemployment, rising inflation and squeezed living standards.Miliband looked to use the actions of Occupy to reiterate the messages unveiled at the last Labour Party conference, where he vowed to rid the country of ‘irresponsible, predatory capitalism’. He added that politicians were in touch with the wealthy elite but were ‘badly out of touch with the reality facing the other 99 per cent’.

Labour must now find its roots again. Labour politicians need to re-find their integrity and speak up and lead like Aneurin Bevan once did so admirably. We need modern day politicians to represent us, like he did and not to follow the neo-liberalists like the Pied Piper led the children to their own extinction. Now is the time for mankind to remember what it is to breathe, to live and to hope.

First, to point out that the UK’s economic recovery started faltering before the Eurozone problems. This will require lots of graphs and easily accessible info in one place, and a sustained attempt to point this out to the media.

Second, it will require the left (and more importantly Labour) to have a strong counter-narrative that works, can unite everyone, and works in their favour. Something like: ‘This crisis shows our financial institutions have stopped working for ordinary people – they are being hurt by a crisis they didn’t create. It’s time to reform the world’s financial system and make it work. The Conservatives won’t do that.’

Get the narrative wrong and we’ve effectively lost this entire generation.

Sometimes I think that it might help to believe in some god, which could magically lead the way to socialism. But I know there is no magic in the sky, my belief is in people not gods. And it is we who can achieve a fairer society, a socialism in a greener world.

If I say to you, “if I share, will you?” or “If I fight against unbridled capitalism and neo-liberalism, will you?”, do you see me as naïve, or do you too, still believe that the human species can determine its own destiny and join me?

If that is so, that is my faith – humanity.

The Human Body: A Source of Profit Think Left

The market has a name – it is Goldman Sachs  Think Left

Meacher Why is resistance coming from the street and not politics?

Liberal Conspiracy : Euro Crisis could set left back a generation

9 thoughts on “Mutation or Mutiny?”