Stitched up! Why the Coalition Government has “No Clothes”.

What’s on your back today? Is it exploited children and abused women, products of a rapidly disappearing and polluting fossil fuel, or is it toxic dyes polluting our planet and our people?

What we wear really reflects the fabric of our society. It reflects power, hence shoulder pads, Roman togas and Eton ties. It leads women to starve themselves, leads children to become sexualised at young age and makes billions for the fashion industry. A close look at the fashion industry reveals how the greediest in the world shamefully make their unethical profits without thought for the environment or the workers who produce it. For the vast majority consumers who buy the cheap and poor quality, quick-to-be-discarded goods, there is little information as to how their must-have garment came to be. 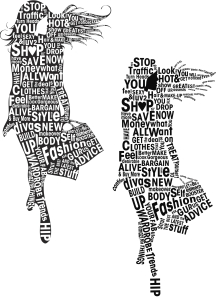 The rise of the wealth, power and influence of Britain has its seeds in the industrial revolution. Much of that began in cotton mills the North West England.

The development was mainly due to mechanization, engineering skills and inventions. Without doubt high production and profits were due to the employment of cheap labour, particularly women and children. Health and safety was appalling.

In Birmingham, that Victorian “ Brummagem workshop of the world”, it was said every pearl button in the world was made there. Metalworking and jewellery manufacture in Birmingham may have made profits for some, but working with toxic metals and with dangerous machinery shortened many lives. I have records of one relative who died when her crinoline became caught in a lathe.

People had no alternative but to take the work offered, it was that or starve or live in the workhouse – or both. The idea that women in the work place are new phenomena is grossly inaccurate – for the working classes anyway.

For power rested with the few. The squandered the earth’s resources and profited.

Our need for clothes has always been so much more than just a way of keeping warm. Decoration of the body, as with other species is part of sexual attraction and mating, of expression of personality, and as a visual sign of Power.

The native American chief was recognized by head-gear with more feathers than others. Roman senators wore togas, which included a stripe died with Tyrian purple extracted from a particular species of mollusc (Murex). It took more than ten thousand molluscs to provide enough dye to make one toga. I wonder how many people worked on their collection and the production of a single garment.

The Incas have been producing brightly-coloured cloth for hundreds of years. showing the wearer’s position in society. Gems and jewellery decorated the wealthy through history. Imitation jewellery may be just as attractive, but it is the rarity of the resource which assigns it a higher value, to be envied by many and displayed by the rich and powerful.

And it is this greed, this desire for profits, which led to the decline in clothing-trade in Britain, but it did not show a decline in the working conditions in the clothing industry, nor the effects on the environment. It simply moved it elsewhere. For in a global market, where labour is cheapest, there will be rich pickings to be made. Profits margins can be huge and tax may not be paid because of tax evasion/avoidance.

Today the clothing industry derives its profits from developing countries. Much is imported from China, South America and Africa. Bangladesh is forecast to be a major source of clothing in the next decade or so. It is predicted that exports could triple in a decade or so.

Yet, working conditions for the people, predominantly women and children are dreadful.

War on Want reports on findings of a study into the Bangladeshi garment industry. The findings are of direct relevance to British clothes retailers and customers as many high street retailers such as Asda, Primark and Tesco source their clothes from Bangladesh.

This is because the country “boasts” that their labour costs are cheaper than anywhere else in the word.

War on Want: “ Women are employed in a highly exploitative context. Women workers remain at the bottom of the supply chain, working long hours for poverty wages and denied basic maternity rights which they are legally entitled to.”

War on Want also reports that women face harassment at work and are denied access to medical staff which the law states they are entitled to. The lack of law enforcement seriously affects health and family life.”

SOS Children’s Villages reports on Child Labour in India. Millions of children in India are engaged in child labour, despite the fact that the constitution and international law offer protection against the hazardous practice.

The country’s 1950 constitution states, “no child below the age of 14 years shall be employed to work in any factory or mine or engaged in any other hazardous employment.”

Yet, some of the girls who work in the country’s cotton industry are no more than 10 or 11 years old.

A Greenpeace investigation tested clothing samples for the presence of toxic chemicals and exposed an industry-wide problem. Lab tests revealed that clothing from 14 out of 15 global brands that had been purchased in 17 different countries all contained the chemical nonylphenol ethoxylates. These NPEs, as they’re known, break down in water into toxic, persistent and hormone-disrupting nonylphenols – contaminating fish, wildlife and people – often having the greatest impacts on rivers near the factories where the clothing is produced.

70 per cent of the rivers, streams and reservoirs in China alone are contaminated.

The fashion industry is incredibly destructive to the environment. The throw-away society it encourages results in piles of waste destined for land-fill. Chemicals leach into the environment as a result of toxic dyes. The demand for man-made fibres is wasteful of energy and raw materials. Even so called “eco-friendly” natural fibres such as cotton is responsible for one quarter of pesticides used. The energy used to transport products across the globe is immensely wasteful, possibly taking longer to travel than the clothes they transport will ever be worn.

What motivates people to make money from such blatant exploitation? The knowledge that they can make their millions and accept no blame, as long as it cannot be traced to them. Now the fourth largest industry in the world, the fashion industry brings in $400 billion a year and includes the revenues from old established companies and a host of new clothing lines introduced by the urban market.”

The International Business Times ranked the top 10 industries with the world’s fastest growing companies and reports:

” The textiles, apparel & luxury goods industry tops our IBT1000 list featuring 7.7 percent of the fastest growing companies in the world over the past three years as the affluent shoppers loosen their purse strings. Indian companies made up more than half of the list, followed by Greater China — home to 18 of the 77 fastest growing textiles companies — and Pakistan. Based on the IBT1000 database, companies within the industry grew at an average compound annual growth rate (CAGR) of 24.6 percent.

The fabrics segment proved the most lucrative for the global textiles market in 2009, with total revenues of $413.4 billion, equivalent to 39.8 percent of the market’s overall value.

Companies boast of how profits are there for the picking – unsurprisingly, some have expressed a wish not to link to their sites from here. Such profits are unethical. Obscenely excessive profit contrasts with the poverty left in its wake. Profits are made by exploiting children, from polluting water supplies, and without any responsibility acknowledged, and without anyone challenging its morality or questioning the legality.

THE EMPEROR HAS NO CLOTHES:

These injustices will continue to exist if we allow them to. We can demand ethical produce. We can educate young people about the reality of the origins of the clothes they wear and yearn for.

Hans Christian Anderson’s story of “The Emperor has no clothes” showed how only an innocent child was brave enough to speak the truth. Everyone else who went about their businesses did not dare to contradict the emperor. They did not feel they could question his power.

Like the invisible cloth woven into the emperor’s silks, this unsustainable fashion industry will inevitably finally self-destruct. There will be no resources or people to spin their yarns or weave their cloths.

No wealthy power needs an outward visual display, to convince people of their ultimate power like the Roman senators and those fore-mentioned. They operate very secretively. The off-shore companies and tax-havens can make up their own laws, because no-one knows otherwise. What happens to the massive profits derived from such abuse? No taxes paid, not compensation given paid for the lives destroyed or the polluted land.

Today, power is held not by people, not even by governments, but by the very richest in the world. They represent no nation, no country. They do not pay taxes due on their earnings, by loopholes no one understands. Globalisation of markets allows them do as they like. But it is only so because we allow it.

Like the little boy in the tale, it is time someone pointed out the governments have no clothes. And it’s true, because without the workers toil, money is nothing. Nothing at all.

War on Want: Women workers in the Bangladeshi garment sector.

Bangladesh exports could triple in a decade

Blog: Five Reasons why the fashion industry should go green

5 thoughts on “Stitched Up!”