For real contentment, basic needs need to be met. The obvious basic needs are food, water, shelter, warmth, and social contact with other human beings. There should be enough of all of this for every one of the seven billion people on this planet.

There are some who have this plentifully, yet who still are discontented. Indeed, such discontent exists within their psyche that they gamble, and gamble with other people’s lives. While some gamble with water, energy and house prices there are those who gamble with food.

This recipe is increasingly common for consumers in global food markets. Although unpalatable, it is gaining popularity with investment bankers and hedge fund managers.

1. Take a bunch of financial regulations, cut off the good parts and water them down.

2. Measure out several thousand tonnes of grain and other staple foods and add them to global markets.

5. Serve with fat profits and a large portion of widespread hunger, poverty and malnutrition for the world’s poorest people.

Such a killing is to be made, they cannot help themselves. Their greed is such that though they have more than enough, they ask, “Can I have some more?”

These Dickensian words cannot help but remind us of the injustices of the Victorian days which those like Cameron and Osborne set out to recreate. (16)

The same banks, hedge funds and financiers whose speculation on the global money markets caused the sub-prime mortgage crisis are thought to be causing food prices to yo-yo and inflate. The charge against them is that by taking advantage of the deregulation of global commodity markets they are making billions from speculating on food and causing misery around the world. Guardian

With plenty in their bellies, yet still dissatisfied from their lot, the rich speculate, ( gamble) regarding food and grain as commodities to be bought and sold, hopefully delivering them a nice fat profit. What they propose to do with profits when they already have enough is a revealing question. They embark on more and more speculation, so sinister like some global computer game to see who can harness the greatest score. They may use the word “investment”(ThinkLeft article) but gambling is a much better description of their activities. Such is the basis of capitalism. 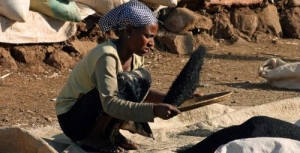 These markets were originally developed for the benefit of those involved in the production of food, yet over the last 10 years they have changed almost beyond recognition. Deregulation has enabled speculators to dominate, causing drastic spikes and crashes in prices.

Massive food price increases are catastrophic for people in poverty in the global south, who spend most of their income on food. This results in:

This is no computer game. The facts are that their activities have led directly to dramatic increases in global food prices depriving so many from their basic needs. So cruel when there is plenty, so sad when the prospectors already have enough. This is madness. The madness of capitalism which brings happiness to no one and ultimately global disaster to us all.

Indeed, the world’s largest commodities trading company, Glencore is so delighted at the prospect of a food crisis Chris Mohoney boasts (11) about “ the current global food crisis and soaring world prices as a “good” business opportunity.” Such a slip of the tongue led to some German banks (4) to withdraw their association from these activities. Cameron’s recent hunger summit (15) coinciding with the Olympic Games amounted to no more than a pretence, political opportunism to give the impression that he is actively opposing such activities. The same companies making a killing out of the Games make their profits at the expense of the cold and hungry.

The banks which are profiteering most from food speculation are the US Goldman Sachs and Morgan Stanley alongside UK High Street Bank, Barclays. Indeed, it has been revealed that Barclays have made Five Hundred Million pounds from the world’s hungry. (1)

The World Development Movement report estimates that Barclays made as much as £529m from its “food speculative activities” in 2010 and 2011. Barclays made up to £340m from food speculation in 2010, as the prices of agricultural commodities such as corn, wheat and soya were rising. The following year, the bank made a smaller sum – of up to £189m – as prices fell, WDM said.

The revenues that Barclays and other banks make from trading in everything from wheat and corn to coffee and cocoa, are expected to increase this year, with prices once again on the rise. Corn prices have risen by 45 per cent since the start of June, with wheat jumping by 30 per cent.

Barclays makes most of its “food-speculation” revenues by setting up and managing commodity funds that invest money from pension funds, insurance companies and wealthy individuals in a variety of agricultural products in return for fees and commissions. The bank claims not to invest its own money in such commodities.

Since deregulation allowed the creation of such funds in 2000, institutions such as Barclays have collectively channelled an astonishing $200bn (£126bn) of investment cash into agricultural commodities, according to the US Commodity Futures Trading Commission.

Barclays’ dominance in commodities trading is thanks to its former chief executive Bob Diamond, who was Britain’s best-paid banking boss until he was forced to resign last month following a £290m fine for attempting to manipulate the Libor interest rate. As boss of Barclays Capital he boosted trading in agricultural products.

This is something which is affecting us all. We may feel uncomfortable thinking of the hungry in Africa and India, only for the guilt to be dismissed as we rush round Tesco’s or Waitrose. The UK is not immune. The cost of living is rising, it’s going to start hurting the comfortable middle-classes who supported Clegg and Cameron. The number of people directly affected by bank speculators will be the majority.

As Yvonne Roberts writes in the Guardian: (2)

.. we ordinary mortals are facing the most sustained and savage attack on our standard of living for decades, with the poorest inevitably faring the worst. But it’s not just the poor. For the first time, even the once comfortable are experiencing the anxiety of how to pay the mortgage, fill the car, meet the supermarket bill.

Last Wednesday, five million households learned that their fuel bills will increase up to £100 a year because SSE, the UK’s second-largest energy group, announced that its tariffs would rise in October. More will follow SSE. Ofgem, the regulator, reports that the profit margins of power companies are due to increase by almost 14%.

On the same day, Santander, Britain’s second-biggest mortgage lender, announced a rise in its mortgage rate so repayments will jump by £300 a year on average from October, £700 on a £200,000 loan. Many borrowers can’t go elsewhere because they have little equity. Add to that stagnating wages; rail fare and council tax increases; private rents at a peak; the ever-climbing price of essentials such as food and clothing; and the cuts to benefits that include less help with childcare costs and the assault on our standard of living is unremitting.

Since the speculation depends on being fed by the majority, surely it is unsustainable if the majority are to suffer? What will then be the consequence?

Consider what drives a person to such greed, to accumulate meaningless wealth at the expense of his own species? It does not provide happiness or contentment. I believe it is because of deprivation of other needs; we also need friendship, respect, morality and self-esteem. Mankind evolved because of interdependence. (14) Global capitalism is relatively recent in our timescale. Many of us remember the words of Margaret Thatcher, “There is no such thing as society.” Those words may well have been a prophesy for our future. It is no exaggeration to state that unless change is made, mankind is doomed. We need each other.

What can you do?

The European Commission and the French and US governments have all said they want to bring food speculation into the open and regulate it to stabilise prices. We need to you to help pressure the UK government to ensure that it backs proposals for regulation and not to take sides with the banks to block reform.

Email George Osborne at the Treasury, asking him to support strong and effective regulation to stop banks from betting on hunger.

The Treasury is the government department which decides whether the UK will support international regulation to rein in excessive speculation on food prices.

There are several banks on the High Street. If a bank is speculating in commodities which is fuelling the rise in food prices, then banking elsewhere may force the banks to change their course of action. Whose money are they speculating with? Who makes the profits? Use your influence.

Think Left: Why Investment not Cuts is Key.

A Recipe for Hunger: How the world is failing on Food : Download Document

4 thoughts on “Why Barclays and Co “can’t get no satisfaction” from food speculation.”