The final release for UK GDP in the 2nd quarter of 2012 showed a small upward revision to recorded growth. But this still showed a contraction of 0.4% of GDP for a third consecutive decline. Real GDP is now 1% below the level recorded in the 3rd quarter of 2011.

Previously SEB has shown that the driving force behind the recession has been the decline in investment (Gross Fixed Capital Formation, GFCF). That remains the case. In aggregate real GDP has declined by £60bn since the peak level of activity in 2008. Investment has contracted by £50bn.

Only the decline in household consumption comes close to making such a negative impact on GDP, falling by £42bn. In contrast the other main categories of GDP have risen. Government current spending has risen by £13bn while net exports have risen by £14bn. The latter is overwhelmingly due to the slump in import demand as exports have risen by less than £3bn over the period. GDP and its main components are shown in Chart 1 below. 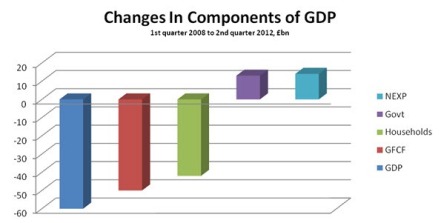 This is shown in chart 2 below. This is the same format as the previous chart but it covers the time period from when the Coalition came into office. In addition it separates the two sources of investment, public and private. The data for these are taken from Schedule F of the latest  quarterly national accounts. 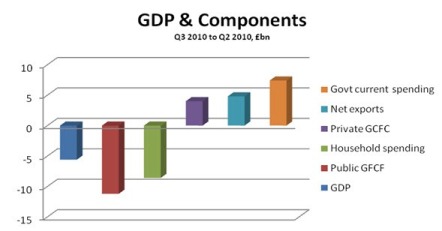 Over the period of the Tory led-coalition’s time in office the economy has contracted by £5.6bn. But the main driving force is no longer the investment strike of the private sector. It is the sharp contraction in public investment which has fallen by £11.2bn, almost twice the fall in GDP. Private investment has actually increased by £4bn over the same period.

It is noteworthy that household spending has also fallen by an amount greater than the fall in GDP, down by £8.6bn and reflects the effects of ‘austerity’, the cuts in welfare and other payments, the public sector wage freeze and the decline in real wages because of high inflation. Off-setting these to some extent have been the rise in government current spending and the increase in net exports.

In a very direct sense the latest contraction in the British economy is a function of government policy.

It is a recession made in Downing Street.