The latest estimate for Britain’s GDP growth in the 3rd quarter of 2012 left the initial estimate unchanged with growth of 1% in the quarter. Boosted by a series of special factors to do with the prior Jubilee holiday, the Olympics and other events, most forecasts suggest that this will give way to much slower growth in the 4th quarter. There are even forecasts that there will be a ‘triple-dip’ with growth contracting once more at the end of the year. In reality the overall situation is better characterised as stagnation, with growth fluctuating around zero. The source of the current crisis is becoming ever more apparent. As the chart in Fig.1 below shows GDP has fallen by £47bn in real terms from its peak in the 1st quarter of 2008 to the 3rd quarter of 2012. Over the same period investment (Gross Fixed Capital Formation) has fallen by £49bn. That is to say the fall in investment is now greater than the entire fall in economic activity. Of the other components of GDP only the fall in household consumption comes close to matching the negative impact of declining investment. Consumption fell by £37bn over the same period.

By contrast government current spending rose by £14.7bn over the period, while net exports rose by £29.3bn. The rise in net exports is almost wholly attributable to a slump in imports as exports have barely increased. Imports have fallen by £19.1bn.

Without the detail provided in the third and final estimate of GDP it is not possible to determine the source of the slump in investment. It is possible that the public or private sector which is responsible. But SEB has previously shown that the entire second recession was caused by the decline in public sector investment and this is in line with the stated plans of the Coalition government to sharply reduce its own investment.

This highlights an important point. Governments across the OECD have increased their current spending in the crisis. According to the OECD government current spending is up from 19% of GDP on average to 22%. This covers government expenditure on areas such as pensions, unemployment and incapacity-related benefits, health, housing supports and other social policy areas. In some cases the efforts to limit these outlays have been severe, but the growth of unemployment and poverty has automatically pushed them higher.

A number of commentators have recently called for a currency devaluation as a way to revive the British economy and outgoing bank of England Governor Mervyn King has described a recent very modest rise in the value of Sterling as ‘unwelcome’. These calls tend to ignore the fact that Britain has already had very substantial devaluation. As the Bank of England chart shown in Fig. 1 below shows the decline in the pound’s exchange rate index (ERI) from 2008 onwards. The ERI fall was nearly 30%, with a slightly larger fall against the US Dollar and a less pronounced fall versus the Euro. The recovery in the currency’s exchange rate has only been a partial one.

There are usually two main effects arsing from a sharp currency devaluation. One is to increase the price of all imported goods which cause inflation. This is what happened and the British economy was the only major economy to experience both a sharp economic downturn and a rapid rise in inflation during the crisis. The other usual effect of currency depreciation is to cheapen the price of exports in foreign currency terms, and so provide a boost to exports and the growth and jobs that depend on them. But following that devaluation exports have barely grown in volume terms. 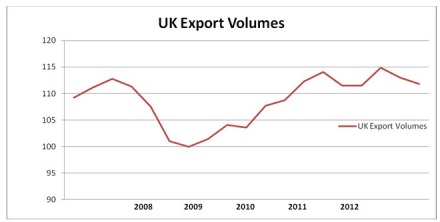 From their pre-recession peak exports fell by 11.3% to their low-point. They have since recovered but were still 0.8% below that peak in the 2nd quarter of 2012. Since George Osborne announced the ‘march of the makers’ as the theme of his first budget in 2010 export volumes have actually fallen by 0.4%. This is possibly the only time in British history where there has been a very substantial currency depreciation and no recorded improvement in export performance.

This is a remarkably bad performance given that world trade has expanded since the recession of 2008 to 2009, according to the World Trade Organisation, by 13.8% in 2010 and by 5% in 2011. It is also a remarkably poor performance even compared to sluggish major trading partners. Fig. 3 below shows export volumes compared to both the US and the Euro Area. Euro Area export volumes are now 3.6% above their pre-recession peak while US exports have increased by 8.3%.

Of course, these are not the strongest performers. As a group, Newly Industrialising Countries’ exports have risen by approximately 50% over the same period according to WTO data.

There are numerous reasons for the exceptionally poor export performance of the British exports over the recent period. Patterns of trade are highly dependent on the weak export markets of the industrialised countries, financial services played a disproportionate part in the exports of services during the upturn, exporters responded to the devaluation by raising prices rather than winning market share, and so on. But all of these can be essentially reduced to the current problem of not producing enough goods or services that the rest of the world needs to buy. To correct that requires investment.

Given that the private sector remains on an investment strike, the government could respond as a minimum by investing in high-speed rail links, improved port facilities, super-fast broadband and through investing in education by scrapping fees and bringing back EMA. It could also remove the restrictions on visas including student visas so as to increase trade and educational ‘exports’. A government committed to creating hi-tech jobs would invest directly in carbon-reduction and renewable technologies for which there are very large and growing export markets. But that would all require a very different type of government.

The new recession is directly made in Downing Street

WHY MORE ‘AUSTERITY’ IS ON THE WAY

THE UK’S BUDGET DEFICIT IS RISING NOT FALLING