People of a certain age will remember,  the third-of a-pint milk bottle, drunk with a waxy bent straw on school morning breaks. I am one of them. Provision of free milk in schools went a long way in the efforts to eradicate rickets. Free school meals ensured  that children in poverty received a wholesome meal.

After the passing of the 1906 Education Act Local Education Authorities were empowered to provide free school meals. In 1921 this had been extended to free milk. However, an investigation by John Boyd Orr (published as Food, Health and Income in 1937) revealed that there was a link between low-income, malnutrition and under-achievement in schools. Following the 1945 General Election, the new Prime Minister, Clement Attlee, appointed Ellen Wilkinson as Minister of Education, the first woman in British history to hold the post. Wilkinson had long been a campaigner against poverty and in 1946 managed to persuade Parliament to pass the School Milk Act. This act ordered the issue of one-third of a pint of milk free to all pupils under eighteen. (Spartacus)

School Milk for all children, like the National Health Service were both introduced by the 1945 Labour government. It was a brave government, supported by a unified population intent on rebuilding society , as shown in ‘Spirit of ’45‘. Policies like these demonstrate the commitment the 1945 government had in improving living conditions, health and education for working families and to help eradicate the poverty and poor health which many children faced, rickets was not uncommon. A caring welfare state  built communities and brought people together – a unified society.  Provision of milk for all children avoided the stigma at being ‘ seen to be poor’ and in need of charity.  There was real movement towards a more equal society which turned its back on the Dickensian state.

The signs that the Conservative Party opposed a more  united society were there in 1973, when as Education Secretary, a young Margaret Thatcher’s intention to remove the entitlement of school milk for all children. I remember the anger she caused and in defence of the welfare state, protested and marched chanting, ” Maggie Thatcher, Milk Snatcher.”

But the scale of the plans she had to break up the welfare state, were kept secret, and not publicised until 30 years later in 2001.  At the time it was vastly underestimated

“…. documents released under the 30-Year-Rule paint a more complicated picture of what the future prime minister was prepared to sign up to.

Shortly after election, Prime Minister Heath wrote to his cabinet, telling them: “We shall need determination and a willingness among spending ministers to accept reductions in programmes which, from a departmental stand point, they would be reluctant to make.”

And in August 1970, the new Secretary of State for Education responded to a Treasury demand for education cuts in four areas:

The Tories always had a plan to reverse the improvement in living standards.  Even then they knew their policies would be so unpopular it would induce civil unrest. She also introduced fees for museum entry. Since the Coalition government has been introduced , the dismantling of the welfare state in but just one term is ensured. They planned it as such because, like then they knew of its unpopularity, and have done so by deceit. It is not necessary to wait for another 30 years, the evidence is already clear, though hidden in the main by the mainstream media. The internet has allowed the lay person a voice. How long until it is silenced.  She oversaw the increase in charges for children’s meals, through the principle of entitlement for free school meals  has remained, with the belief it would invoke public outrage. Until now. Now we hear that free school meals are under threat and the return to Dickensian Britain will be complete. 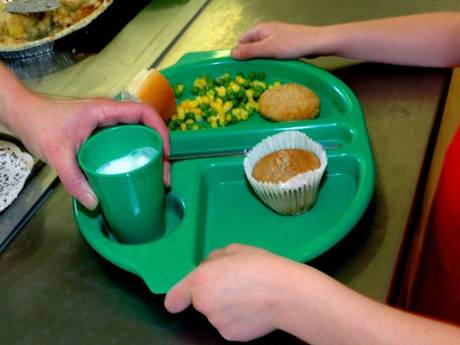 Free school meals could soon be scrapped and people paid to look after elderly neighbours as councils take desperate measures to deliver a “tidal wave” of spending cuts, ministers will be warned on Tuesday.

Closures of municipal theatres, leisure centres, libraries and play groups will accelerate because of a 50 per cent reduction in local authorities’ spending power, according to a report from an independent think-tank.

The New Local Government Network said town halls will struggle to cope with a £16.5bn gulf which could, under current Coalition plans, open between their income and the demands on them.

Austerity is based on lies, that ‘there is no money left’ It is time for some straight – talking from politicians and the lie about the structural deficit exposed. This is a time for investment not cuts. These Austerity policies being put in pace are totally unnecessary. It is a planned, ideological programme, continuing Margaret Thatcher’s great plan to dismantle the welfare state which protects us all. Undoubtedly she was clever in avoiding the truth, in Dickens’ own words, an “Artful Dodger”.

If Thatcher was ( to some degree) cautious in the rate at which she dismantled the welfare state, Osborne has no such qualms. Now, one hundred years on, the return to a Dickensian state is ensured, and Osborne  has said as much. The believe that Victorian Britain is desirable is surreal, like the worst nightmare from which we awaken, shaking in  disbelief.

We have all heard stories of Victorian Britain.  Apparently it was a golden age, or so our current government wishes us to believe. For some of us Victorian costume dramas are not merely agreeable ways to while away Sunday evening but enactments of our inner fantasies … “I don’t think there has been a better time in our history.” said Michael Gove Guardian  Clearly Mr Gove’s history is quite different to mine, and to the vast majority of people living in the UK today. The Guardian article adds:

David Cameron had stated that his goal is to defund and deconstruct the welfare state, to “dismantle big government and build the big society in its place”. His ambition is radical in the purest sense of the word, for it is a conscious attempt to turn the clock back to the historical period for which he feels the greatest affinity: the 19th century.

Victorian Britain was a land of laissez-faire capitalism and self-reliance. Government regulation was minimal and welfare was left to charity. With little tax burden and low labour costs, industrialisation turned Britain into the workshop of the world and created a thriving middle class. The state helped promote and safeguard trade through a bullish foreign policy that created a consumer’s empire. In 1839, we even went to war with China to force the Middle Kingdom to lift its ban on imported British opium.

Disappointingly, in 2010, the previous Labour government was not courageous enough to show the Spirit of 1945. The document Child Poverty Act of 2010 to eradicate child poverty is available here  for downloading. This was Labour’s plan. Spot the difference.

111. Section 26 concerns the provision of free school lunches and milk. Subsection (1) amends section 512ZB of the Education Act 1996 to give the Secretary of State (or, in relation to Wales, the Welsh Ministers) an order-making power to extend eligibility for free school meals if the child meets prescribed conditions and the child’s parent is in receipt of a prescribed benefit or allowance.

112. The Secretary of State may extend eligibility for free school meals to a primary school child if the child’s parent is entitled to Working Tax Credit and the family has a household income below a specified threshold. Currently, the Education Act 1996 allows the Secretary of State (or the Welsh Ministers) to adjust eligibility for free school meals only on the basis of the benefit being received by the parent, rather than the age of the child. It is therefore not possible to use existing powers to extend the entitlement to free school meals to primary school children of parents who are entitled to Working Tax Credit without also extending the entitlement to secondary school children within the same family.

Now the nightmare is a reality, it is time to wake up, discover a “Spirit of 2015″ , plan for a Courageous State. A united left needs to plan a better future together just as the Labour Party did seventy years previously.