Something interesting happened recently in Worcester – The Labour Party, Lib Dems and Greens formed a coalition and ousted the Conservative leader who had led the council for seven years. This was because Worcester woman and man returned a council with No Overall Control.

During angry exchanges in the council chamber, deposed council deputy leader Councillor Marc Bayliss lambasted it as an “unprincipled coup by a new socialist alliance”, claiming it was about “national ideology, not the performance of the administration or leader.”“What the party opposite could not achieve through the ballot box, they are now forming through a shady deal,” he said.

Fellow Tory Councillor Andy Roberts, who lost his £5,985 role as cabinet member for finance, said it was a “shameless” agreement done behind their backs.

Some might be surprised at the reaction considering the situation following the General Election when there was no party in parliament with overall control. “Shameless agreement behind backs?” Who can forget the days following the General Election when it was unclear who would be the governing party? It seems that those Worcester Tories cannot see the parallels between Worcester and Westminster. Some might say that rather than a government with no overall control, this is a government out of control. Certainly, they are pushing through policies from no party’s manifesto.

The Tories act as if they had won overall control, a working majority. The Liberal Democrat vote was boosted by some centre left voters, who had trusted Clegg’s pledges. Those voters see little difference now between either members of the Coalition, the social democrat element of the LibDems having been engulfed by a government more right wing than Thatcher. The Tories realise this, and, clutching at straws hope for a Clegg replacement which might retain those votes which enabled this fudged coalition.

If it is to win the next election, Cameron’s party needs a Lib Dem leader who can win over Labour voters in Tory-Labour marginals. At present, after the defection of around a third of 2010 Lib Dem voters to Labour, the Tories stand to lose dozens of seats at the next election (Corby was an early warning) – there are 37 Conservative-Labour marginals where the third place Lib Dem vote is more than twice the margin of victory.

The suffering inflicted by this government will not be forgotten so easily by the electorate. What impact have the Liberal Democrats had on the direction of this extreme right wing government? What principles have been thrown away at the cost of power? During that seemingly interminable weekend immediately after the election and before the Coalition agreement, there were contradictions. Shirley Williams warned Nick Clegg about going into a coalition with the Conservatives. Paddy Ashdown spoke on Andrew Marr show, some excerpts here..

“The nation has spoken and in so far as we can determine what it’s said, it’s said you guys are … we’re going to give none of you power to govern alone; you’ve got to learn the habit of working together….”

“We want to preserve frontline services… “

“I don’t believe that anybody can now establish a new government who is deaf to the calls from the British people for a reform to our political system.”

Vince Cable said in December 2010, that he could quit the Coalition. Think Left’s “contradictions of Liberal Democrat Opportunism” examined the focus of Liberal Democrats on power over principle. Many Liberal Democrat voters and grassroots now look to other parties especially Labour, and must wonder why the party they worked for at the General Election have voted for a Bill leading to the break up and privatisation of the National Health Service? This was sold for a referendum on AV which was duly lost. Was this really a price worth paying?

“Why do the Lib Dems stay in the Coalition?”

Lib Dems would do well to consider these arguments from Hucknall’s Councillor Jim Grundy, against their support of this Tory government. The recent by-election in South Shields showed the measure of anger from the electorate, as the Lib Dems were annihilated. 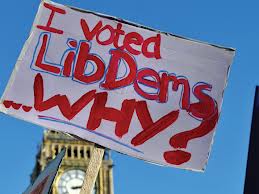 Every day that the Liberal Democrats continue to support this government, they let down the British people. Crossing the floor of the House of Commons might just earn them some respect before they inevitably suffer death throes and subsequent extinction.

5 thoughts on ““Tories ousted by Labour coup?” Worcester or Westminster?”