Privatisation of the Royal Mail

As I’m sure you are all aware by now, the Royal Mail was privatised on Friday. It was sold for £3.3 billion. Within a day the share price had risen by 38%, meaning that the company was seriously undervalued and some people made a quick profit.

Billy Hayes, General Secretary of the Communications Workers Union, said, ‘If you sold your house and the buyer sold it on the next day for 38% profit, you’d ask “what was the estate agent doing?”’

Actually it is even worse than this. If you remember, the government took on the company’s pension  liability two years ago. That was at a cost to the exchequer of over £10 billion. 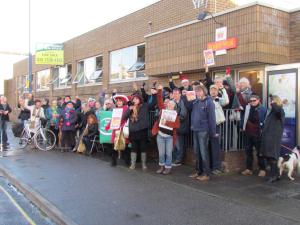 So in this case the government has spent three times the value of the property, in order to sell it at a significant loss, in order for the new buyer to then sell it on for a profit.

Meanwhile, the company has spent the last two years modernising the business. Postal workers have been provided with new vans, new trolleys, new walk-sequencing machines, new GPS devices, new bags, new shelving units, new uniforms, and a range of other equipment. Delivery offices have been closed all over the country and consolidated into larger units. Costs have been cut and door-to-door (junk mail) incorporated into the work load. New working methods have been introduced, and every round in the country has been extensively restructured.

All of this has been done at the taxpayers expense, of course.

70% of the company has been sold to large investors: to banks, hedge funds, pension funds and sovereign wealth funds, including the one belonging to the Kuwaiti Royal Family. In other words, the British public have taken a significant loss so that this fabulously wealthy family can extract even more wealth for themselves.

The Kuwaiti Royal Family are the absolute rulers of a medieval feudal state. Not ‘wealth creators’. Wealth extractors. That means that postal workers in the future are going to be the servants of a feudal Lord. Serfs, in other words. Who says there’s no such thing as progress?

Moya Greene, the current CEO, has also said there will be further job losses, which can only mean that postal workers will be expected to work harder. She took £1.47 million in pay and bonuses last year. No doubt she will be given substantial share options too, now that the company is in private hands.

So what will this mean for you? Let’s make the comparison with previous privatisations.

Water charges have risen by 245% since the water boards were privatised. Subsidies to the rail industry have more than doubled, while fares have increased above the rate of inflation and standards have declined. And in the same week that the Royal Mail was floated on the stock exchange, the energy company SSE put up its prices by 8.2%. More price rises are expected to follow.

Did you know that the origin of the word ‘idiot’ is from the Greek word meaning ‘private’? Or, to put it another way, the sale of Royal Mail has brought even more idiocy into our public life.

7 thoughts on “Privatisation of Royal Mail – So what was the “Estate Agent” doing?”