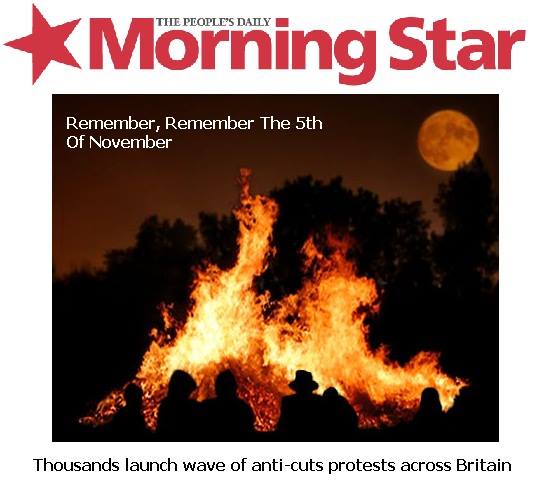 Westminster was at the centre of a tornado of anti-austerity protest last night that began in the early hours and tore across Britain as the day went on.

The day of action co-ordinated by the People’s Assembly movement saw small-scale guerilla activism sweep through northern and southern England, and Cardiff activists playing a cat and mouse game with police to hang an effigy of David Cameron from the city’s castle walls as part of a string of actions.

“No more pennies for this guy,” read the sign around his neck.
Other targets ranged from job centres and offices of the hated Atos Origin capability assessment firm to #PayDay lenders and #NHS privateers.
But all had one aim – to say No to austerity and Yes to a people-first Britain.

In Brent, north-west London, 70 campaigners descended on the magistrates court against a mass prosecution of 500 people who haven’t paid their council tax. Most of those targeted used to receive benefit to make ends meet which has since been cut by the council and left them struggling to survive. The 500 are the first from a group of 3,200 who will be dragged before the court.

Unite the Union Community co-ordinator Pilgrim Tucker told the Star: “People are really desperate here. Some are talking to me about turning to crime. “The council need to be persuaded not to pass down cuts from central government onto the most vulnerable.”

Cardiff activists occupied the Welsh headquarters of British Gas and confronted bosses over rising energy bills. They then rallied at the city’s iconic Anuerin Bevan statue before bringing trading to a halt in Topshop, Boots UK and Starbucks. The People’s Assembly supporters reported “a great reception by shoppers as we blockaded the stores.”

In Ipswich 100 campaigners held a vigil outside a job centre and joined in solidarity with striking probation workers. In the evening protesters gathered round bonfires to burn effigies of Tory ministers and placards detailing austerity measures.

Activist Miles Hubbard reported “a really good reception from the public – people are fed up with austerity. “In the coming weeks we will step up our campaign for a living wage by targeting choice employers.”

In Middlesborough a flash-mob-style sing-a-long protest against austerity took place in the town centre, while Teesside People’s Assembly members also joined forces with probation officers striking outside of the Middlesbrough Probation Trust headquarters.

Local Barbara Campbell commented: “Some resistance fighters make bottles into Molotov cocktails. “I’ve made mine into pasta shakers, but don’t go underestimating me Mr Cameron.
“I am one of the 99 per cent.”

As night fell in London demonstrators descended on their most high-profile target of all – an occupation of Westminster Bridge in the shadow of the ministries where hated Con-Dem austerity policies are hatched.

6 thoughts on “Bonfire Night Protests across the UK”