What else is as unimaginably horrific as nuclear war? The horrors are so awful that the human mind cannot endure to see  images or to contemplate the physical, mental and emotional pain. It is now 70 years since August 6, 1945, when the United States used a massive, atomic weapon against Hiroshima, Japan. This atomic bomb, the equivalent of 20,000 tons of TNT, flattened the city, killing tens of thousands of civilians. While Japan was still trying to comprehend this devastation three days later, the United States struck again, this time, on Nagasaki. ( 9th August 1945)

It is not good enough to turn away – the images and the facts must be faced up to. We cannot uninvent nuclear missiles, but we can discover why they should not be in existence. I am appalled that there are plans to replace Trident, a nuclear missile which must be never used. No, not my name. It must not happen.

Face up to these images, the ones they don’t want us to see: listen to the stories.

Although the names of Hiroshima and Nagasaki were incised into our memories, there were few pictures to accompany them. Even today, the image in our minds is a mixture of devastated landscapes and shattered buildings. Shocking images of the ruins, but where were the victims?

The American occupation forces imposed strict censorship on Japan, prohibiting anything “that might, directly or by inference, disturb public tranquility” and used it to prohibit all pictures of the bombed cities. The pictures remained classified ‘top secret’ for many years. Some of the images have been published later by different means, but it’s not usual to see them all together. (see more here )
Signals:

All the watches found in the ground zero were stopped at 8:15 am, the time of the explosion. 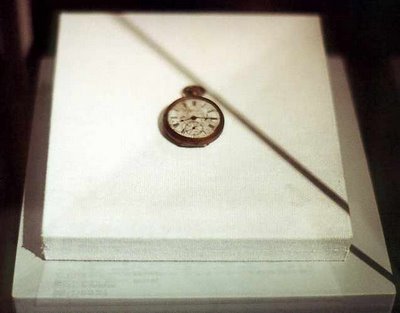 Within a certain distance from the site of explosion, the heat was so intense that practically everything was vaporised. The shadows of the parapets were imprinted on the road surface of the Yorozuyo Bridge, 1/2 of a mile south-southwest of the hypocentre. Besides, in Hiroshima, all that was left of some humans, sitting on stone benches near the centre of explosion, was their outlines. 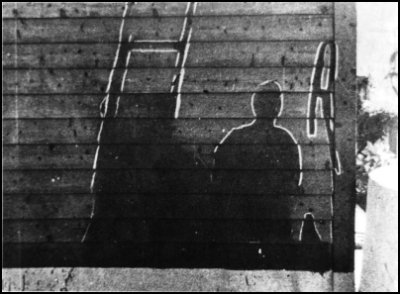 On August 6, 1945, 8.15 am, the uranium atom bomb exploded 580 metres above the city of Hiroshima with a blinding flash, creating a giant fireball and sending surface temperatures to 4,000C. Fierce heat rays and radiation burst out in every direction, unleashing a high pressure shockwave, vaporising tens of thousands of people and animals, melting buildings and streetcars, reducing a 400-year-old city to dust.
Housewives and children were incinerated instantly or paralysed in their daily routines, their internal organs boiled and their bones charred into brittle charcoal.

Beneath the center of the explosion, temperatures were hot enough to melt concrete and steel. Within seconds, 75,000 people had been killed or fatally injured with 65% of the casualties nine years of age and younger.

Radiation deaths were still occurring in large numbers in the following days. “For no apparent reason their health began to fail. They lost appetite. Their hair fell out. Bluish spots appeared on their bodies. And then bleeding began from the ears, nose and mouth”.

Doctors “gave their patients Vitamin A injections. The results were horrible. The flesh started rotting from the hole caused by the injection of the needle. And in every case the victim died”.
Hibakusha is the term widely used in Japan referring to victims of the atomic bombings of Hiroshima and Nagasaki. The Japanese word translates literally to “explosion-affected people”.

They and their children were (and still are) victims of severe discrimination due to lack of knowledge about the consequences of radiation sickness, which people believed to be hereditary or even contagious.

Many of them were fired from their jobs. Hibakusha women never got married, as many feared they would give birth to deformed children. Men suffered discrimination too. “Nobody wanted to marry someone who might die in a couple of years”.
Yamahata, the photographer of Nagasaki

On August 10, 1945, the day after the bombing of Nagasaki Yosuke Yamahata, began to photograph the devastation. The city was dead. He walked through the darkened ruins and the dead corpses for hours. 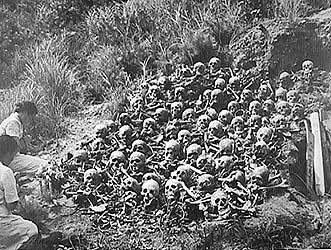 By late afternoon, he had taken his final photographs near a first aid station north of the city. In a single day, he had completed the only extensive photographic record of the immediate aftermath of the atomic bombing of either Hiroshima or Nagasaki.

“A warm wind began to blow – he wrote later – Here and there in the distance I saw many small fires, like elf-fires, smoldering. Nagasaki had been completely destroyed”

Mr. Yamahata became violently ill on August 6, 1965, his forty-eighth birthday and the twentieth anniversary of the bombing of Hiroshima. He was diagnosed with terminal cancer of the duodenum, probably caused by the residual effects of radiation received in Nagasaki in 1945. He died on April 18, 1966, and is buried at Tama Cemetery, Tokyo.

Everyone should see them and understand. Hiding and pretending will not do.

Atomic Bomb survivors never forget, and while they inevitably diminish in number , their resolve to fight to rid the world of nuclear missiles grows ever more determined.

We cannot help but wonder what is the point and sense in developing more and more horrible weapons, which can never, ever be used, and if they were the consequences of modern weapons would be far worse. They can never be used without a suicidal action. In modern times of suicidal terrorism, suicide itself is no deterrent, the existence of nuclear missiles is not only pointless but an incredible waste of money, resources and human effort which could be much better used elsewhere.

Colin Powell:  I became Chairman of the Joint chiefs of staff in 1989 and I had 28,000 nuclear weapons under my supervision. And every morning I looked to see where the Russian submarines were off the coast of Virginia and how far away those missions were from Washington. I kept track where the Russian missiles were in Europe and in the Soviet Union. The one thing that I convinced myself after all these years of exposure to the use of nuclear weapons is that they were useless.

They could not be used. If you can have deterrence with an even lower number of weapons, well then why stop there, why not continue on, why not get rid of them altogether…This is the moment when we have to move forward and all of us come together to reduce the number of nuclear weapons and eliminate them from the face of the earth. “Nuclear Weapons Are Useless”

The pointlessness of it all is clear – the danger of nuclear weapons is such that they should not even exist. That there are stockpiles of radioactive uranium and plutonium around the world is alarming – should these ever get into the hands of maniacs it would surely be an end. The expansion of nuclear power holds the same dangers,  and at a time when there are effective renewable sources for energy, why is it even being considered?

Who can we trust? Why is David Cameron in favour of supporting a replacement to Trident?  Parliament voted against British forces being used in Syria in 2013. Recently, it has transpired that David Cameron lied, and that was against Parliament’s explicit  instructions, British Forces were involved in an air campaign. David Cameron was fully aware of the action.  We must consider what are the reasons for Cameron’s support for a Trident replacement. Is it financial? Whatever is his reason, it is clearly very, very silly.

In January 2015, A Commons motion against renewal of Trident was crushed by 364 votes to 35 after Tory and Labour front benches joined forces to back the weapons of mass destruction. A number of Labour MPs abstained.
The motion was moved by the SNP, Plaid Cymru and Green MP Caroline Lucas.
Mr Blunt, the only Tory supporting the motion, said he was wearing the regimental tie of the Light Dragoons.
He told MPs that when he worked as a special adviser at the Ministry of Defence, he found it impossible to find a scenario in which Britain would decide to use nuclear weapons.

The SNP’s manifesto for the 2015 General Election opposed Trident’s renewal. and their landslide on May 7th, winning all but three seats in Scotland demonstrates that there is a huge opposition to this policy.

In 2016, there is to be another vote in Parliament on the replacement of Trident. Jeremy Corbyn, and several other MPs  will oppose  Trident replacement. Even if renewal is rejected, after the Syria vote was totally disregarded, I cannot help but wonder, whether Mr Cameron is taking much notice of parliament at all. What power does he hold over the use of nuclear weapons. It is truly terrifying.

If the cost to the planet of nuclear war is obliteration, it seems trivial to even consider the economic implications.The government is in favour of replacing Trident at a cost of around £100 billion. This money would be enough to fully fund A&E services for 40 years, employ 150,000 new nurses, build 1.5 million affordable homes, build 30,000 new primary schools, or cover tuition fees for 4 million students. It is astounding, and extraordinarily costly. So much good  could come of savings from the cost of the maintenance and replacement of Trident’s replacement, and the related  nuclear energy industry. The nuclear industry is massively subsidised by the British public. Sizewell B, the UK’s most recent power station cost the taxpayer around £3.7billion just to install Decommissioning and cleaning up all of our current nuclear sites is costing more than £70 billion.

Many people are employed in the nuclear industry – there is no logic in retaining it on the grounds of employment. Diplomatic solutions to conflict need personnel equipped  with necessary skills. We should be developing education, communication and understanding, of issues of other societies, not dividing the world further. We are one people. Jobs could be provided for scientists and experts developing our green energy policy.

People must protest against this renewal and demand an end to these weapons. Our politicians must stand alongside us. On this our opposition must oppose. Abstention will not do. There are protests (AWE) demanding disarmament all around the world including in the UK where 4 Day Fast Protest against Trident is planned  in London. (August 6th-9th).

CND have been campaigning since 1958. There is a host of information on their website.

“In loving memory of my Mom and Dad, who opposed nuclear weapons, and who were married 70 years ago, on the 6th August 1945, the day of the Hiroshima bombing. I know they  would welcome the election of Jeremy Corbyn as Leader of the Labour Party, and the fight to preserve the welfare state and hopes for the younger generation. They always supported and encouraged young people.” Pam Field

5 thoughts on “Nuclear Weapons are Horrific, Pointless and Extraordinarily Costly : So, Ban Them.”