On Sunday, the Labour Party announced its policy to provide compensation for 3.8 million women. For four years Labour have been supporting the 50s women, many of them working on low pay, who suddenly, and without warning had date of their retirement pension changed. It is also shown on Page 75 of the Labour Party Election manifesto, and not a polciy dreamt up on a whim as the Tories have suggested. Labour have supported the women throughout.

The five-year policy will see women born between April 6, 1950 and April 6, 1959 receive £100 for each week of state pension they have lost. It is a universal scheme, and those affected most by the steep rises will be compensated accordingly. Anyone eligible will start receiving cash within months of a Labour victory at the December 12 election 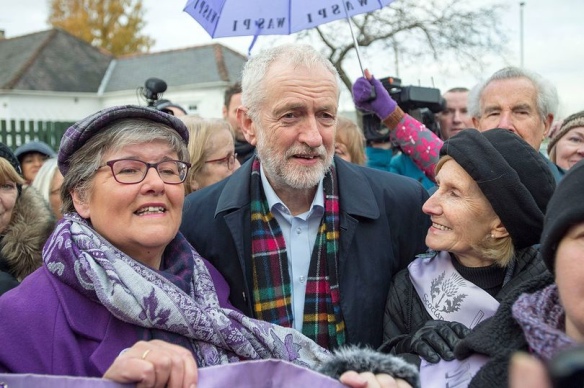 Sky News reported on a huge WASPI reception for Corbyn in Derbyshire , with the WASPI women cheering, “Ooooh Jeremy Corbyn”.

On Friday the BBC edited the footage from the leaders’ debate on BBC Question time, replacing laughter at Boris Johnson on the question of him speaking the truth to clapping, and also changed the repsonse from another question

The BBC has admitted that it should not have edited out the BBC Question Time audience’s laughter at Boris Johnson’s response to a WASPI woman’s question. May Rookes, the ‘WASPI’ woman who exposed Boris Johnson in yet another lie during last week’s BBC Question time leaders’ special, has spoken out about Labour’s plan to compensate 1950s-born women for the pension entitlement stolen from them by the government. Ms Rookes skewered Johnson on the programme, forcing him to admit that he was not going to fulfil his promise made just in August to sort out the injustice – and she now says that having read Jeremy Corbyn’s plan, she thinks it is ‘a fantastic offer’ and is sure other WASPI women will agree with her. Sqwkawbox Reports Ms Rookes is supporting the Labour Party and hopes for a Labour victory.

Johnson had said that he thought honesty was very important in a Prime Minister – triggering mocking laughter from the audience and applause for May Rookes’ question. But the BBC edited the footage for broadcast the next day, giving the impression that the audience was applauding Johnson rather than his critic:

Today, the BBC have again shown bias  and have omited to  show the warm and huge reception to the Labour leader from the women the even  though BBC News was unable to find a single woman to comment negatively about Labour’s pledge – or Labour’s ability to deliver it  and Corbyn’s reception was omitted from the coverage. The BBC’s bias by omission still failed to hide the massive approval for Corbyn’s plan – and the women’s comments made clear that only Labour is helping them and only Corbyn can be trusted to keep his promise.

Since the election of immensely popular Jeremy Corbyn as Labour leader, the British media including the publicly owned BBC have sought portray a negative image of the party, supporters and the Labour leader and fabricated stories.

The BBC and other broadcasters, under electoral law should remain  and during election campaigns must show balance. The BBC are clearly not being impartial and this is profoundly undemocratic.