Johnson’s “Get out of Jail Free Card’ is about obtaining absolute power.

Now I am very concerned about Boris Johnson. Following the decision of the High court in September regarding the prorogation of parliament, the behaviour of the Prime Minister was shocking. There was an awareness unprecedented in modern times, of the fragility of our unwritten constitution, and a feeling that democracy was at risk in Johnson’s hands. This man, who presents as a bumbling fool is dangerous. He cannot be trusted by anyone. There is a consensus that lies have been told, often repeated  lies which have already been exposed and discredited  such as the non-existent 40 hospitals.

At the launch of the Conservative party manifesto in Telford, Johnson claimed that the A& E of the local Princess Royal Hospital would remain open, only to be contradicted moments later, by the Health Secretary, Matt Hancock. Pete Gillard, a 70-year-old retired IT professional who has campaigned to block the changes, said “Johnson came to Telford knowing that closing the local A&E was a big election issue, so when asked he made up an answer he thought would please people. Just like the 50,000 extra nurses lie, you can’t trust anything that comes out of Johnson’s mouth about the NHS.”

Johnson is making everything up as he goes along, and he is totally unsuitable to be the Prime Minister. He does not appear to have any empathy with people. In reality, he lives in a world so detached from lives of ordinary people, he does not know when he is being insensitive, such as turning up in the midst of a flooding emergency with a mop. In fact doesn’t even care. In the event of the electorate handing the Tories a majority at the forthcoming General Election we could be saddled with this sociopathic PM for five more years, or even indefinitely. Johnson’s ex-boss Max Hastings say, “I have known Johnson since the 1980s, when I edited the Daily Telegraph and he was our flamboyant Brussels correspondent. I have argued for a decade that, while he is a brilliant entertainer who made a popular maître d’ for London as its mayor, he is unfit for national office, because it seems he cares for no interest save his own fame and gratification.”

The narcissist’s thirst for self-gratification knows no bounds, and I could even see Johnson refusing to resign as PM, should he be defeated in the General Election.

There is a passage buried in the Conservative manifesto has been causing a lot of concern. Particularly after Labour peer Lord Falconer discussed the matter on BBC Newsnight and suggested that it could put Boris Johnson above the rule of law if the Conservatives win. It would give the Prime-Minister carte blanche to by-pass parliament, and be above the rule of Law. It would effectively make Britain a dictatorship. The existence of the monarchy is in place to prevent this, yet the Queen did not intervene in September.

‘The Canary’ reports on the details of the Conservative Manifesto:

“Won’t be restrained by the courts”

The manifesto itself essentially needs decoding. It reads:

We will ensure that judicial review is available to protect the rights of the individuals against an overbearing state, while ensuring that it is not abused to conduct politics by another means or to create needless delays

Speaking about it on Newsnight, host Emily Maitlis asked:

“Is this a shifting away from a legal framework to a political framework?”

“It is… It’s an absolute echo of what the government’s response was to the [suspension of parliament] case where the Supreme Court said the prime minister had acted unlawfully in [suspending parliament] for a long period of time. They said it was conducting politics by another means. So… that bit of the manifesto… if Mr Johnson becomes prime minister again, he won’t be restrained by the courts from acting unlawfully.”

Overriding the rule of law?

In the manifesto passage, the Tories characterised Britain’s legal institutions as “politics by another means”. This can be true. But usually those other political means are rulings against the public and in favour of the establishment. For instance, the High Court recently ruled against postal workers striking for better pay and conditions. That’s despite the senior deputy general secretary of the Communication Workers Union Tony Kearns pointing out:

‘We’ve got a 97 per cent yes vote on a 75 return. It is the clear democratic will of the employees of Royal Mail and members of the CWU to take strike action, as is their human right. In this case, the High Court is outlawing strike action that workers have voted for by an overwhelming majority (97%).’

But, on the positive side, Britain’s legal system can also reign in a government that is trying to override the democratic process. For example, the Supreme Court ruled in January 2017 that the Conservative government cannot trigger the process for leaving the EU (article 50) without parliamentary approval. This ruling ensured that there were proper checks and balances on the Brexit process.

Now the government seems to be trying to stop that happening again. With the cover story that it’s channelling ‘the will of the people’ on Brexit, Johnson’s Conservatives appear to be trying to move towards absolute power over the nation. If Labour does not win this election, the implications could be even more dangerous than we thought. 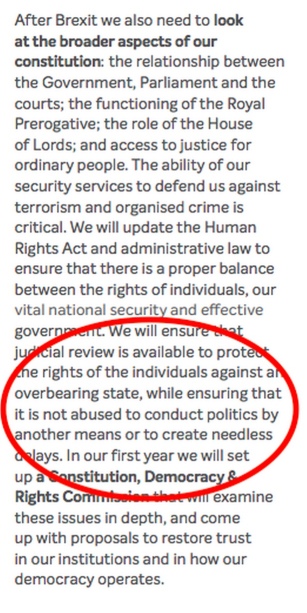 ‘If what this manifesto promises were to become fact, Mr Johnson would be the only person in the entire United Kingdom whose work decisions could not be ruled illegal. His job would not be subject to 2,000 years of legal precedent, human rights laws, equality considerations, or even a freshly-minted law made by Parliament.In the interests of “effective government”, the ancient rights of Royal Prerogative could be used to overrule Parliament, so that the government and Prime Minister could act illegally, without the tiniest chance of stopping it. This is not the separation of powers: this is the concentration of power in one man, and his hand-picked goons.’

For those who claim that Jeremy Corbyn, (the Leader of the Labour Party) , as a democratic socialist,  as  was Harold Wilson,  and Attlee  before him, is ‘a danger to our security’ is alarmist. I would ask them what their conflicting interests are in making such a claim. These are lobbyists or tools of the elitist billionaires whose powers  have rendered our democracy already  little more than a sham. Yet for the media barons, and those who appear to have taken control of the BBC, to ignore the accession of a sociopathic narcissist to a position of ultimate power beyond the law of this country, is an act of folly endangering our security, and international peace.

We just cannot trust Boris Johnson in any circumstance whatsoever.