By:  Sue Davies  and  Pam Field

Soaking up the Sun, (and Wind and Wave and Tides)

While politicians, businessmen, stock brokers and bankers spent their summer soaking up the sun, there have been riots and looting,  financial crises and crashes, rising unemployment figures, yet more bloodshed over oil, and, for some us at home a fair bit of rain to depress us all further.

But how many, wisely, while sitting on their deckchairs – or yachts – soaking up the warmth from the energy in the sun or sipping the cocktails, realised, or even cared, how much of the former could have been avoided if it were not for the short-termism of politicians, who seek re-election and no doubt seek to please those companies contributing to their re-election?

Use of clean, green energy sources both on a micro and macro scale has to be the political focus for the future. There is a very real danger of global warming. The world’s oil resources will be depleted within fifty years, and our dependence on it for energy and as a raw material  must inevitably come to an end.

Ed Miliband was the first Labour Minister to really begin to understand the crucial importance of acting immediately to avert the worst impacts of climate warming.  In October 2008, he announced that the British government would legislate to oblige itself to cut 80% of greenhouse gas emissions by 2050.

Two policies introduced by Ed Miliband are particularly noteworthy. The feed-in tariffs for solar produced electricity…  no mean task given the Thatcher government’s legislation to block energy production other than by the privatised providers…  legislation not repealed by previous Labour ministers;  and the legislation to prevent new coal fired power stations unless they could capture and bury 25% of its emissions immediately, and 100% by 2025.  This decision came after talking to and being persuaded by the Kingsnorth power station demonstrators.  The power station plans were shelved.   In contrast, John Hutton had been content to wave an unmodified power station through planning consent, without conditions of any sort. 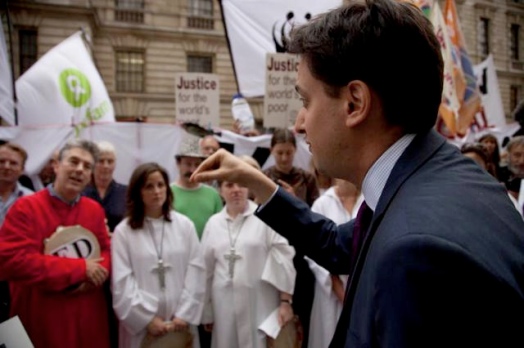 Had the Kingsnorth power station gone ahead , this would  likely to have been the result:

UK emissions are unlikely to have been reduced by an amount greater than 40% by 2020 as needed to prevent catastrophic climate impact. Mirrored around the world such action would increase the temperature globally by 4°C by the end of 21st Century,  resulting in:

Ed Miliband  realised that people were not going to embrace green energy and micro-generation without a nudge in that direction. In April 2010, the Feed-in-Tariff (FITs scheme) was introduced by Labour under powers in the Energy Act 2008.  The intention is to encourage small scale generation of low carbon electricity by paying people a  fixed sum for the energy they generate and export.

The primary source of current micro generation energy which is renewable is solar energy. Some vertical heat pumps may access planetary heat, as well as surface solar heat, stored in the ground.

There is evidence that individuals are responding to the FIT scheme, and frankly without this policy most would not have given the idea serious consideration.

In contrast David Cameron, dithered about whether he should reject the lesser target of 60% by 2030 (as recommended by the CCC) because it was opposed by Vince Cable’s Department of Innovation and Skills and Hammond at the Department of Transport.  In the words of Meg Hillier, the Shadow Secretary of State for Energy and Climate Change:

It is scarcely credible that ministers are considering rejecting the advice.  To fail to act now on climate change will secure their place in history as the least green government of our times.

And frankly given the fine words but lack of action by the Blair government, the charge of being less green is a serious one … but essentially confirmed by Jonathan Porritt of Friends of the Earth.  He described the likelihood of the Coalition living up their green promises as “vanishingly remote”.  Of  77 green promises, there has been little or no progress in more than 75%.  8: Cameron’s  Green Credentials, Guardian, May 2011

When elected Leader of the Labour Party,  Ed Miliband stressed that tackling climate change, as reported in the Guardian  was a central task for Britain and the World.  The Labour Party should adopt  a programme of investment in reducing energy consumption and increasing a mix of renewable energy sources … a programme which would create jobs, reduce fuel poverty, protect the environment and reduce climate warming.

Rather than nuclear power, or further fossil fuelled derived power, in addition to microgeneration, Labour should be considering tidal power such as that which could be generated at the Severn Estuary, develop wind and PV generation, consider wave power.  The Desertec Foundation, which is not profitmaking, has demonstrated how “ within 6 hours deserts receive more energy than humankind can consumed in a year (Dr Gerhard Kines). Use of HVDC grids can bring this clean energy to Europe and beyond.

Given that 72% of Tory MPs are against the greater use of renewables and clean energies, Ed Miliband is the leader more likely to put the future of global populations at the Centre of policies.

‘Only 27 per cent of Tory MPs said they supported greater use of renewable and clean energies even if they added costs to businesses and households, while 72 per cent said they were opposed.’

11 thoughts on “Soaking up the Sun”