There is no Super-Man

Peak oil is the Crisis we must face.

As a species, we are nothing special. We think we are so much cleverer than any other which ever evolved on Earth. We do not have super powers. Superman does not exist. Neither are we built in “God’s own image”.

Like any other species, we succumb to the cyclical powers of nature, whether it is an earthquake, volcano, tsunami or tornado, whether a freak plague of insects, or drought, flood or famine; all of these disasters were written about in ancient times.

Like any other species there are limiting factors on our population, but we can maintain a sustainable population by “living within our means” or maintaining a balanced population size (carrying capacity) which is in equilibrium, living within a world able to supply all our needs for survival.

Yet it is our own activities which increase the risk of extinction. We have knowledge, but we do not use it, share it or act on it. Why not? I’m talking about common sense. The danger is staring us in the face, while we choose to ignore it time and time again. The price of ignoring the evidence will be extinction of mankind. This can be avoided, but we must act, and we need to start now. It’s time we grew up and stopped pretending.

In an interview ahead of his birthday (8 January 2012), Professor Hawking spoke to BBC’s Radio 4 Today Programme and answered questions put to him by listeners.

He said: “It is possible that the human race could become extinct but it is not inevitable. I think it is almost certain that a disaster, such as nuclear war or global warming will befall the earth within a thousand years.”

He also said it was essential humans colonise space to allow them to spread across the universe.

Very simply, we need to consider:

Warren S Thompson (1887-1973) on population change spoke of the transition from a world dominated by high mortality, autocracy and subsistence to a ‘new’ world of low mortality, democracy and an ever globalising economy. This period (DTM4) of slow but steady population growth he saw earthly paradise in which mortality, fertility were low. His prediction was that population growth would eventually lead to a slow decline in population (DTM5) due to a very low birth rate, a low death rate and a slow decrease of the total population.

There are already signs that we are rapidly moving towards a decline due to limiting factors on population. Current global problems such as water, soil and food depletion are signs that human population is growing beyond that sustainable on a planet with finite resources. To survive a species needs to be sustainable and to maintain our carrying capacity (sustainable population) such that the resources are maintained for subsequent and future generations.

“The most startling example of the exhaustion of stage 4 is Russia’s recent demographic performance. Since the breakup of the Soviet Union, Russia has lost 5.7 million people through higher death rates and lower birth rates. This is equivalent to the emptying of Scotland and the city of Newcastle-upon-Tyne.”

Paul Chefurka in Population: The Elephant in the Room sees things quite differently than Thompson did, primarily because of oil usage.

“At the root of all the converging crises in today’s world is the issue of human overpopulation. Each of the global problems we face today is the result of too many people using too much of our planet’s finite, non-renewable resources and filling its waste repositories of land, water and air to overflowing. The true danger posed by our exploding population is not our absolute numbers but the inability of our environment to cope with so many of us doing what we do.”

The correlation between oil production and human population is very clear

Oil allowed the rapid explosion of population because of industrialisation. Farms could be ploughed by machinery rather than being pulled by the horse, so food production became more efficient. Transport across the globe became a reality. Distribution of food and medicine and other resources became possible over wide geographical areas. It might seem like a dream, like a paradise. But all this is unsustainable. OIl production has peaked, and therefore so has population, and we are set for a decline. The real test of man’s intellect will be how we deal the crisis of Peak Oil.

Peak oil does not mean that the world is about it run out of oil. It refers to the point at which the supply of oil can no longer increase. There is lots of the stuff left; it’s just getting much more difficult to find and extract, which means it is getting very hard, and perhaps impossible, to increase the overall ”flow” of oil out of the ground.

The good news is that it is perfectly possible to produce energy sufficient to maintain balanced population without oil and without other earth damaging fossil fuels or uranium.

HVDC Power Grids distributing power from the world’s deserts via high-voltage, direct-current cables can sustain the energy needs of the population as long as our Sun continues to shine. Add to this hydro-electric power, wind energy, geothermal energy, wave energy and tidal power.

In ecology, overshoot is said to have occurred when a population’s consumption exceeds the carrying capacity of its environment, as illustrated in this graphic. 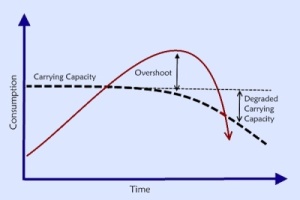 The population explosion was predicted eighty years ago by Warren Thomson. The prediction has been shown to be broadly accurate. Forty years ago, Limits to Growth reported on a human population model World 3 warning that we had to curb growth or risk global meltdown.

It was highly controversial, and not what many wanted to hear. Perhaps it was fear that led to denial. Maybe they were hoping for a Superman.

As Paul Chefurka points out:

“The human cost of such an involuntary population rebalancing is, of course, horrific. Based on this model we would experience an average excess death rate of 100 million per year every year for the next 75 years to achieve our target population of one billion by 2082. The peak excess death rate would happen in about 20 years, and would be about 200 million that year. To put this in perspective, WWII caused an excess death rate of only 10 million per year for only six years. not hard to see why population control is the untouchable elephant in the room – the problem we’re in is simply too big for humane or even rational solutions. It’s also not hard to see why some people are beginning to grasp the inevitability of a human die-off.”

But, ominously, as New Scientist reports on 10th January 2012

The common perception is that the work was discredited scientifically. It wasn’t.”

It wasn’t just confusion. “Misunderstanding was enhanced by a media campaign very similar to the one that has been recently directed against climate science.”

Most journalists and BBC presenters do not have a background in Science, most having alternative degrees such as history or linguistics. But it is not all about knowledge, it is about political will. Much is spoken about ignorance of Science. Much is spoken about neo-liberalism too. Margaret Thatcher must take some responsibility for the neoliberalism which has resulted in the excessive wealth of a few. But Margaret Thatcher understood Science. She held a degree in Chemistry and worked as a Research Chemist. So Thatcher should have known better.

It is not just the reporting of scientific evidence that journalists avoid. It seems that purpose of the media is not to inform at all. Articles are carefully chosen by editors. Censored newspapers print what suits the rich and powerful. (See The Human Body )

If globalisation means anything it should mean that we act as One World. Communication today is possible without jet travel. The time has come for our governments to work together. It is time for the truth to be heard. Governments serve the people. Their legacies will depend on how they act now. There must be an end to lies and manipulation of the media. It is time governments stopped treating the people as children and give us the facts we need to know.

Global poverty results from the plutonomy which now controls the earth. In Greece people are already abandoning their children. Can you imagine that? The human suffering which will result from population overshoot is unimaginable. We would expect starvation, poverty, and mass deaths. It is a nightmare, not the dream of paradise.

We can avert it. This world must act as One World.

Paul Chefurka in Population: The Elephant in the Room

Peak Oil can fuel a Change for the Better

How and Why Journalists avoid the Population- Environment Connection

BBC: Greek children too poor to care for their children,

Some of the Scientific Evidence – Climate Change

Clean Coal (Another Financial Device for the City?)

Energy for Somerset: Nuclear or Tidal?

Coal is our Heritage not our Future!

Soaking up the Sun: Ed Miliband, the Coalition and Climate Change

2 thoughts on “There is no Superman to save us from Peak Oil.”