Much is said about the need for unity, after all it’s what trade unionism is all about. That’s why Thatcher set about destroying the unions. Much is said about division. How cleverly Thatcher pushed working people apart. Now Osborne and Cameron seek to do the same by demonising the working class, by targeting hard working people who need Housing Benefit to afford a home. It is incredulous that  they can launch such callous attacks on the disabled and critically ill members of our society. Isn’t it illegal to incite hatred? Isn’t that the mechanism by which Thatcher and Osborne achieve their selfish aims?

I’m saddened when listening to people living in the North of England  blaming “Southerners” for voting in Thatcher and disregard those in poverty in such areas. Undoubtedly there is great disadvantage in the North, but in the South too. They are as blinkered in their belief that everyone South of Birmingham is living a life of luxury as Daily Mail Readers who claim everyone living on benefits is scrounging and living the life of Riley.  While attributed to many origins including Irish American immigrants, this conjures up an idea of living a life of luxury at someone else’s expense – another word is parasite.

The Tories must be so self satisfied to observe ordinary people in self destruct mode, North against South, Town against Country, Man against Woman, Black against White.

The parasites of society are indeed those who live a life of luxury and who do no productive work. There is another word for them – Bankers! They give parasites a bad name!

Please remember the real division is  between  rich and poor, not North and South. The struggle of a miner in the North  or an agricultural worker in the South West of England is just the same.  “Those who pick apples should be able to afford them.” Enjoying and sharing  the benefits of labour – is  the fundamental principle for the Labour movement. And it was from Dorset that early seeds of trade unionism grew.

Trade unionists remember the Tolpuddle martyrs of the 19th Century. In 1834 six farm labourers were fighting for the right to be a member of a trade union in order to improve working conditions. They were convicted and transported to Australia. These sentences provoked an angry response and what followed was an uprising which led to mass trade unionism. Annually, in July trade unionists march through the small Dorset town in acknowledgement of the sacrifices made by these men. Today, agricultural workers’ rights are being attacked by the Coalition government. 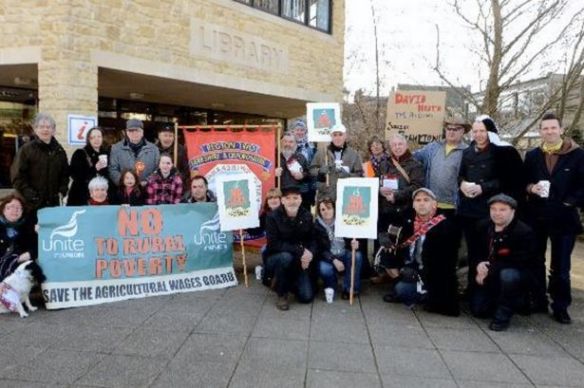 On Saturday, 179 years later, in an echo of that historic moment in the fight for workers’ rights, the martyrs’ banner went from Dorset to the office of Farming Minister David Heath in Frome, Somerset.

This time it was fighting the worst affront to rural people’s lives in almost six decades.

“We took the banner because we feel there is real danger facing rural workers,” says John Burbidge, a 64-year-old farmer and grandfather-of-four from Tolpuddle.

“If the Government’s plans go ahead we could see people losing their ­livelihoods and their homes.”

There is now less than a week left to save the Agricultural Wages Board.

On Tuesday, the ConDem Government will try to turn the clock back on the British countryside – tearing up the rights of more than 150,000 workers and taking £279.7million from rural families over the next 10 years.

Cashing in on that £27.9million a year will be Britain’s landowners and big businesses.

The Duchy of Cornwall is among those supporting abolition, and the big supermarkets will also stand to gain.

The International Food Union fears that children could be exploited if the board is abolished. The board has fixed minimum pay rates for children of compulsory school age, and higher rates of pay for the over-16s than the National Minimum Wage. It is not uncommon for children to be missing from school in rural areas at harvest time. Unite has real concerns for child exploitation. This Friday 12th April, the Lib Dem President, Tim Farron will be lobbied about the abolition of the Agricultural Wages Board. Please show your solidarity and ensure that this important issue receives the public attention it deserves. The coalition wants division, needs division, and it is about time the people have confidence that there is the political will to overcome this injustice. Politicians’ duty is to serve people, not pursue their careers. To date the public need convincing.

In the words of Charlie Chaplin, (full transcript here)

Let us all unite. Let us fight for a new world, a decent world that will give men a chance to work, that will give youth a future and old age a security. By the promise of these things, brutes have risen to power.

Soldiers, in the name of democracy, let us all unite!