Get Together! – Now we need Trade Unions like never before.

Trade unionists remember the Tolpuddle martyrs of the 19th Century. In 1834 six farm labourers were fighting for the right to be a member of a trade union in order to improve working conditions. They were convicted and transported to Australia. These sentences provoked an angry response and what followed was an uprising which led to mass trade unionism.

Margaret Thatcher attacked the Trade Union movement, because she knew that the working class and the Labour movement were united in strength. Under Thatcher, membership of trade unions  fell. Ironically, David Cameron’s policies, supported by The Liberal Democrats are breathing new life into trade unions, as working people recognise the need to be  organised and to  unite , as human rights and civil liberties are being crushed. The individual worker is very vulnerable under this government.

Today, trade union membership is growing, up in May for the first time in a decade.

There has been an erosion of workers’ rights, to a level not seen since Victorian times, (114 year workers rights scrapped by Coalition Government)  and wages are cut while the cost of living rises.  Pensions are attacked,  and workers forced to continue working to old age, whether they want to or are able to work.This all amounts to class-warfare, at a time when the rich grow ever rich and governments protect the status quo.

Apathy of workers allows this. There are more of us. Collectively, our voices are deafening. Global corporations can exert and power and lobby parliaments, because they have the power of finance but they represent a tiny minority. Ultimately, money is nothing, and growth and development is only achieved by the labour, knowledge and skills of working people. Without those, society will fail.

There has never been a time when working people need the protection of a trade union more. Today, it has been announced that individuals are to be charged a fee for employment tribunals. 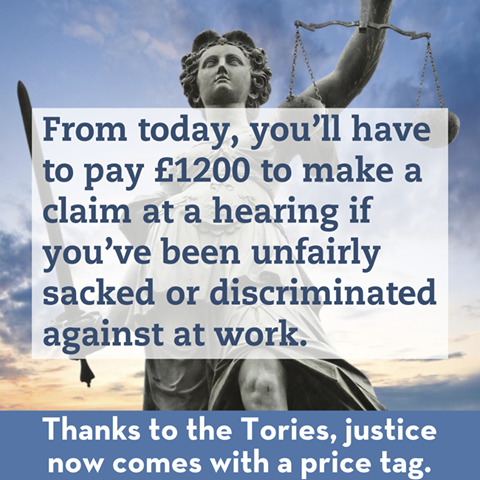 From Monday, workers in the UK will be charged a fee to bring a claim, a fee if the claim is heard and a further charge if they want to appeal against the decision.

Lawyers are predicting widespread chaos as charges are introduced for those pursuing sexual harassment or race discrimination complaints. Trade unions say the move – which ministers claim will save money for businesses and taxpayers – is the latest attack on workers’ fundamental rights. (Guardian)

The TUC general secretary, Frances O’Grady, said: “Today is a great day for Britain’s worst bosses. By charging upfront fees for harassment and abuse claims, the government is making it easier for employers to get away with the most appalling behaviour.”

This is an outrageous announcement on top of the withdrawal of legal aid, the abolition of the agricultural workers’ wages board, the stripping away health and safety equality laws which have taken generations to achieve. This is the last straw. We need to get together and to challenge this government.

Under the Tories, justice now comes with a price tag.
Your rights at work – worth fighting for.
Join the campaign: http://www.yourrightsatwork.org.uk/

10 thoughts on “Get Together! – Now we need Trade Unions like never before.”