From Pam Field and Syzygysue

The Austerity Scare is the greatest myth, by which the rich have deprived others of their basic needs of survival (Maslow), by some argument that those are unaffordable. How can it be justified to deny anyone these basic human rights, while others have vast resources far beyond their own personal needs? This wealth, and hence power was gained  by the systematic acquisition of resources by unjust means, much as the barons claimed land to be their own.  (Primary accumulation – dispossession of low income people from their high value land). By what right can anyone claim to have a right to own earth when others cannot?

Having power of the law permits reinforcement of privilege so that attempt to brainwash the public  through whatever means is available – education, press, advertisements, commercialisation  – or force. So the very rich have the means to control all the sources of food and sustenance, the media, the security and defence. Fear of destitution leads to social division, and of course with disunity no resistance can be effective. What needs to be done to redress the imbalance?

There are sufficient resources on this planet for everyone.  Oxfam  believes there can be enough food for everyone…

IF governments stop big companies dodging tax in poor countries, so that millions of people can free themselves from hunger

IF governments and big companies are honest and open about their actions that stop people getting enough food.

It is shameful that in Britain, the seventh richest nation, has 25% of children living in poverty, many people are homeless and one million people are relying on food-banks. It is a scandal created by gross mismanagement, or by wilful neglect. The Tories recall the Victorian days of Empire, like the cheering and flag waving Falkland task force, without addressing the fundamental truth.

Any society can only measure its wealth by the poorest, and its strength as the weakest.

Having seen the horrors man can inflict on man in WW2, there was a united resolve which followed that it should never be repeated, and a determination to build a fair society fit for everyone. Rationing was accepted after the war to ensure a fairer distribution of scarce resources. Meanwhile Attlee’s Labour government invested in full employment, massive house building, a welfare state and National Health Service. There was a growth in the economy, despite the ravages left by war.

One of the saddest legacies of Margaret Thatcher’s premiership must have been the destruction of optimism in society, the killing of compassion, and comradeship, and communities.  It was replaced with isolation, resentment and fear engendered by soaring unemployment, caused by destruction of manufacturing industries while attacking on trade unions, so making the working class further malleable by the ruling elite.

The idea that the nation’s wealth was somehow like the family budget, pennies hidden away in a biscuit tin in the larder, just to be taken out and spent on a trip to Margate when the factory shuts down for a fortnight in August, can be understood as people prioritise their needs by similar means.

So, unbelievably, Margaret Thatcher sold the idea to the nation, that the money which the government has to spend on schools and hospitals, is like the microeconomics of a family budget, or the ins and outs of her parents’ grocers shop. And since that time the biscuit tin idea comes into play, “There’s no money left” as Cameron carried that piece of paper to hustings in May. “The nation can’t afford it, we’ve all got to tighten our belts.”  “We’re all in it together!”

Now, where does wealth come from? It comes from the labour, skills, arts, and talents of people, from research, technology and from the natural  resources of the planet. Did Margaret Thatcher expect the nation to believe that they can be parceled up and saved in the biscuit tin? 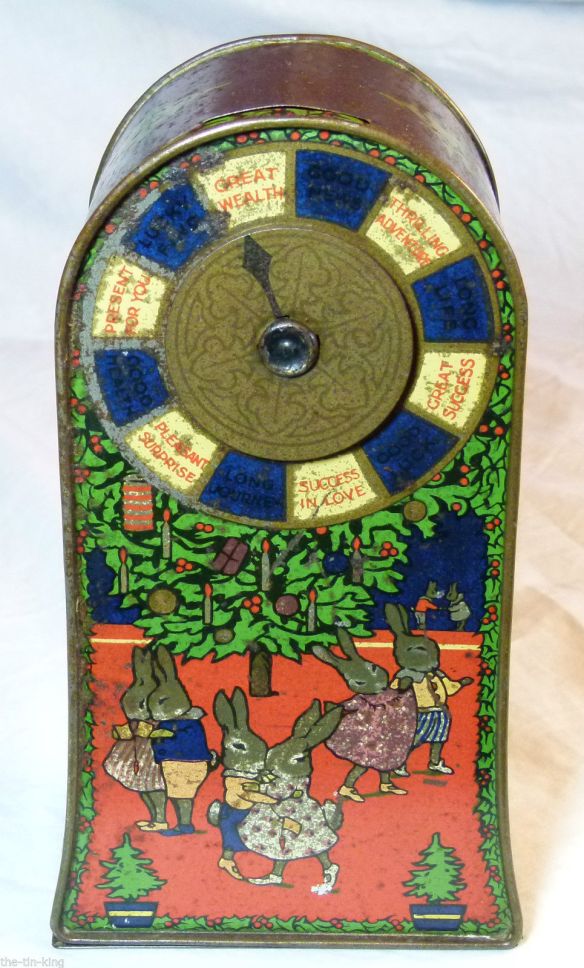 As the cuts to basic provisions became chipped away, so fear sets in, the law of the jungle, competition, scrambling to get to the top, developing addictions to more and more material goods to satisfy a lack of something fundamental – happiness. It might seem a cliché, but this is the background to the shallow, inadequate shells we are becoming, soulless commodities suspicious of some others and hatefully despising the rest.

It doesn’t have to be like this. Of course money is not hidden away in some virtual biscuit tin, no longer gold hidden in vaults to be hauled from place to place. Austerity is totally unnecessary and we can change it at will once we accept what is wrong.

Money is a tool by which goods can be shared around ensuring management of resources, rewards for labour and supply, and trade.  Money doesn’t originate  from the taxpayer. It comes from the government spending.  The US dollar and the UK pound are sovereign monetary systems under control of their respective nations.

Neoliberal economics have led to the greatest inequalities in human history, based on the mystique, that market forces will adjust to give the best possible outcomes.

Considering the unhappiness, poverty, and isolation, in what sense is the current state of the UK, the best of all possible worlds?

We are told that there is no money left so that public services must be privatized and government spending cut but the actual problem is that corporations are hoarding their profits, not investing in well-paid jobs in the real economy and instead are chasing fictitious capital.

Real wages have not increased since the 1970s and consequently there is insufficient demand in the economy, and increasing levels of personal indebtedness.  Forget the national debt, it is household debt that is the real danger!

This is the slowest recovery of GDP per head on record. See graph (Touchstone Blog)

‘Anyone who continues to describe what is happening in the UK as a ‘strong recovery’ either has not bothered to look at the data, or is being deliberately deceptive.’

What is desperately needed is not ‘Austerity’, but a fiscal stimulus and if the banks and the corporations will not invest in the real economy, then the government should act as ‘lender of last resort’.  In other words, a stimulus such as that proposed by Jeremy Corbyn, with investment in jobs, the NHS, education and mitigating climate change.

The allegorical Frank Baum story “The Wizard of Oz” reflects clearly how the pursuit of the yellow brick road “gold”, leading to the “Emerald City” revealed merely that there was no magician, just a helpless, powerless man who admitted the capitalist ideal was a fallacy. The main characters had lacked belief in their own limitations, lack of courage, brain or heart, and believing therefore that others had power. And in that idea, we can see that economy needs to be run for the benefit of the people, not according to the vagaries of the so-called ‘wisdom of the markets’.

So what is necessary is that

… First we need to accept that economy is something which sovereign governments have the power to organise.

… The financial system has been abused for too long.  It needs to be under democratic regulation and control.

…The economy needs to be balanced and controlled to allow people and societies to function sufficiently so that all members can afford the essentials of Maslow, live comfortably, with a little bit extra for everyone to enjoy their leisure.

…There needs to be a commitment to full employment.

… Basic needs such as food, water, energy, transport, health and education need to be under democratic control.

IT IS THE RESPONSIBILITY OF GOVERNMENT to ensure adequate distribution of these services. Therefore nationalisation, and/or transparent democratic control is necessary.  To treat food, water, and medical supplies as commodities to be gambled with is an obscene and unacceptable concession to the very rich.

Cutting spending during recession/depression only delays or forestalls a recovery.  The allegory of Alice in Wonderland describes falling down a rabbit hole, and seeing the world differently, and that is what is needed – the opposite of austerity. Jeremy Corbyn’s Peoples’ Quantitative Easing is about the government producing money, as we have our currency, the government can do that,  but instead of this going to private banks, this money goes directly to the people wherever it is needed – for building, homes, schools, hospitals – and creating jobs. In other words, a responsible state in which everyone would have access to needs being met, and poverty eradicated.

We are told that the deficit is too big but the reality is that it is still too small.  Inflation is only a risk once the last unemployed/underemployed person who wants or needs a job is employed.

Since private companies are not providing sufficient employment, we need government to invest in a job’s guarantee, a buffer stock.  This would have the advantage of underpinning a living wage that the private sector would have to match in order to attract workers.  It would also allow individuals to maintain or upgrade their skills.  It would decrease the mental health problems associated with unemployment, and finally, it would mean that all sorts of worthwhile activity, which would not be undertaken by the private sector, could occur.

The anger and  resentment has been smouldering for a long time. The lack of opposition to neoliberalism and austerity has disillusioned the electorate, so many no longer see any point in even voting.  In August 2010, riots broke out in English cities, in London, and Birmingham. This August, Jeremy Corbyn has reached the ordinary people,  and has channelled that anger in such a way that people are united, and we are a witnessing the greatest political force in 64 years, a tidal wave which can sweep away neoliberalism and bring our communities back. The Labour Movement is reborn. At last, there is hope.

The politics of divide and rule, of resentment and ” benefit scroungers ” is where we have lost our way.  It is not about politics of envy.  It is about the politics of justice. We need brave political leaders to reunite our communities, put away the law of the jungle, and bring back the Spirit of ’45, the sort of social cohesion which followed WW2.

The biscuit tin myth has to be tackled,

and the sooner , the better.