On The Road To Recovery

Anyway, it is not the rights and wrongs of the Palestinian conflict that exercised me that particular day, no, it was the headline in the Daily Express. As I said, in my opening line, the headline was so egregious that just for a moment I got ‘that feeling’, that feeling where your almost hanging on the edge of doing something.  As if  balancing on a high wire  where even the thought of making an utter fool of myself or possibly being taken to the nearest mental health unit by the police was not a deterrent.  The headline that incensed me was something to the tune of  “Property Prices To Rise By 4.4%.” 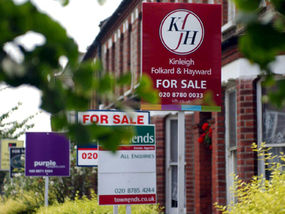 House prices will rise by 4.4 per cent next year, according to an influential City organisation

In fact it wasn’t even headline that really got to me, other than the clear leading implication that this was a good thing. No, it was  the sub heading that went on to say that the value of houses was rising and leading the economy out of the great recession.  So there I was in the entrance to Tesco and about to say what I will say here instead.  No, it is not house values that are increasing it is the price that you the punter is expected to pay. House prices are increasing, that is true, at least in the South-east, but not the value. Value and price, particularly  with regard to property are clean different things. You may say with honesty that more banks are once again willing to lend but you can’t say that in such an economy that these properties  are actually worth any more than they were worth last week or last month or that it is a good thing.  No, again, strange as it may seem for a government  so ideologically opposed to Keynesian Stimulus and market manipulation, that they are doing exactly that; using the governments ‘Funding For Lending Scheme and quantitative easing to pour money into cheap loans for unaffordable properties. 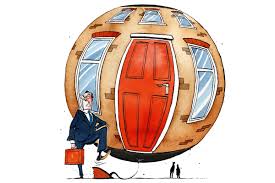 In Tesco 200 Grams of mushrooms have increased in price by nearly 100% since about 2008 but do we see headlines in the conservative ass licking Daily Express extolling the virtues of what is nothing more than fungal inflation? NO! No we don’t.  If I were to go around the shop and do a straw poll of people on what they thought about the rising price of mushrooms would they unanimously say that it was an indication as to the positive health of the economy? No!  No they would not.  They would say it were either a case of profiteering or inflationary forces but I bet a pound to a penny that they would not be cheering in the aisles shouting “Hurrah for good news, the great recession is finally at an end.   I’m paying double for mushrooms.”

The difference between mushrooms and houses is that most people have little financial interest in the world of mushrooms whereas most people do have an interest in the world of mortgagees and houses. If you are a home owner, or more often, a mortgaged owner then at the moment you may feel reasonably pleased. Interest payments are at an all time low and, if the Daily Express is to be believed, the value of your home is rising.  This gives you a warm and comfortable feeling, maybe I ‘can’ draw out some equity, and maybe I ‘can’ afford those two weeks in the sun or ‘that’ new car. If you’re a saver, you may feel just be a little different, your interest has been at an all time low and even long term investments are hardly keeping up with inflation. Ditto with young people.  If you’re saving for your first property, things have not been a bag of laughs for you either.

During the first phase of the housing crash, it was almost impossible to get a mortgage without a large deposit.  This situation has got somewhat better as of late and I suspect that this is the real reason why house prices are moving upwards again.  The only problem is that in some respects we are back to the situation ‘pre crash’ where banks were lending on very small deposits for houses that were way beyond traditional price ratios compared with the general  economy.

Shelter, a national housing charity recently stated that if a chicken had risen in price at the same rate as houses since the nineteen eighties the cost of one would be about £55. 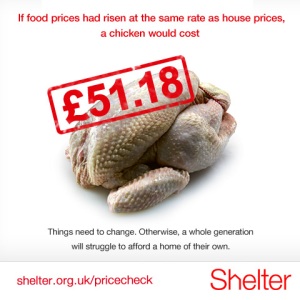 Given that Chickens are still within the range of about £5 to £15 suggests that any retraction we have in house prices so far is negligible and that in real terms houses are still in a huge bubble.

So what has caused this new-found faith in the house buying public that could not be found in the intervening years since the crash? The answer is ‘Quantitative Easing’ and funding for lending .  Quantitative Easing  is a fancy name for an economic strategy that pre WWII Germany found so unsuccessful and probably led to the rise of nationalism’s all over Europe and WWII itself.  Of course, you will hear from its advocates that this is nothing like the money printing of Viamar Germany and that we are not about to see old ladies with barrows full of Deutsch Mark trundling down the high street to buy a loaf of bread.  And those supporters would be right, for one thing most money is no longer printed.  Since the introduction of banking computers’ systems, most money is simply tapped from a keyboard into existence as strange and disquieting as that seems. No, they are right in as much as we haven’t seen anything like the hyper inflationary activity associated with such events but then, neither did Germany, until of course it happened. When it did, it happened with such speed that there was nothing to stop it but that’s another story.  No, the grand plan is this; money is being quantitatively eased into existence. This quantitatively eased money is then used to buy back government bonds (government debt) back from the banks. This leaves the banks with cash to invest and the government with debt that it has been bought back through the use of money that it invented. So far so good….. I think??? (Think Left, Quantitative Easing)

So, to sum things up we have banks heavily backstopped  by the government, lending  to allow first-time-customers to buy overpriced properties and mortgage payers to release equity on these very same over priced properties in order spend into the economy.  This apparently, is the secret to ending the great recession even though it  all sounds like an ever increasingly complex spirals of debt. They, the LibCons and their cheer leading media whores may like to think that this kind of behaviour is, like a vigorously agitated toilet brush, going clear the blockage, but in reality I fail to see how it helps in the longer term.  The simple fact is that as much as we Brits like to kick the crap out of the lazy, feckless Greeks and others it may come as some surprise to this audience that Great Britain has just about the same public debt and exponentially more private debt to deal with.

Max Keiser, or one of his guests described the British economy and this particular policy strategy as follows, it’s like a terminally ill cancer patient given morphine.  While the effects of the drug are still obvious the doctor declares that the patient is on the road to recovery. Finally, property forms great chunks of the British banks balance sheet. That.is to say that the loan is backed by the house that it bought. The house is the tangible asset.  When house prices fall so does value of collateral that the bank can hope to recover should the debtor default. When house prices fall less people are willing to borrow on the perceived value of their houses.  Since the economic crash began the UK and most other affected governments have done everything within their power to stem the house price collapse and promote yet more lending. To do this the government have not only sacrificed savers, by instituting the lowest interest rates possible (negative in real terms) but also Nationalised banks and provided vast sums of liquidity. The banks in turn used this money to build up capital reserves  and not  to lend. So through the Bank of England the government hit back by providing what can only be described as stimulus to  get the economic ball rolling.  This of course is something that they said would not do given their unfaltering belief  in Neo Liberal economics. The simple fact is that the banks were not lending into the economy because in their view the problem had been caused by such lending in the first place and that a good economic argument for doing so did not exist and in that argument the banks were not wrong.

The simple and unpalatable argument is that it is a fallacy to think that a healthy economy is dependent on house price inflation. Again, if the price of potatoes were to double, would that induce economic activity? No, it may prompt farmers to turn over land to grow more potatoes and force the population into substituting another staple such as rice or pasta but it would not benefit the overall economy, it would merely distort it.

This reminds me of an observation of Stacy Hurbert about a tribe of South Sea Islanders who, during the war, came into contact with American military that set up base. When the military  left after the war the Islanders invented what was known as a Cargo Cult that manifested itself in Islanders playing the parts of airfield staff. They cleared parts of the island to make a crude runway and make a tower for one of the tribe to sit  with a pair of half coconuts positioned on each ear. Others ran around with bat shaped paddles as they had seen the servicemen do. They thought that if they did this that  the cargo planes would return. In some ways this is what our governments are doing by artificially trying to maintain house prices without attending to the rest of the economy. Distorting the economics of house prices is just as flawed thinking as that of the islanders.

Our governments are using vast resources to maintain what is in reality a superficial economic effect. This is an effect of what I consider to have been an already a very flawed system at the best of times.  It will provide nothing but a cosmetic makeover that sooner or later will be seen for what it is, a way to fool a few people for a few more years. Stimulating growth through stimulating lending is a disaster, even by their own warped and antisocial economic  perspectives.  God Help Us All!

7 thoughts on “On the Road to Recovery..”