Less than a year ago there was a global outcry, about awful scenes in Paris leading to murders. The victims were expressing their right to free speech through the tool of cartoons. All through history  music, poetry, and satire have been arts through which thoughts can be expressed and shared. It is all part of being human. Can you remember when people carried placards saying, “Je Suis Charlie”, and “I am Charlie?” 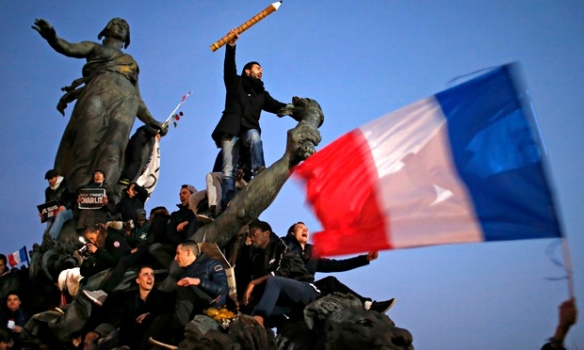 People took to the streets, and were united in horror and determination. As Suzanne Moore commented at the time in the Guardian. She observed that:

Uncertainty is indeed gut-churning, but more and more it is intrinsic to our freedom. Rigidity, finite values, texts that can never be questioned? This is what we must fear. Those drawn to terror cling to an ideology that allows not a glimmer of uncertainty. To doubt is to be weak. Ambiguity is a threat.

At that time, Mr Cameron, defended the rights to free speech, at least is recorded to have supported the cartoon. As such a defender of free speech, I imagine therefore that he will also defend the right to free speech of resident in Bristol, who has used the medium of Art to depict Mr Cameron as a danger to the future of the NHS.

The Daily Mirror reports that Tony Davis, faces prosecution if he refuses to remove it, he could eventually be fined up to £20,000 under the Town and Country Planning Act.

Tony said: “I’ve had a notice of prosecution. If you are a commercial premises you can advertise anything but if you are a private premises you are restricted to a size of 2ft by 3ft.

“But this applies to hoardings – not something that is painted on the wall like mine is.

“Also my question is, what exactly am I meant to be advertising?”

Which brings us to the question of why, when there was such an outrage about the events in Paris last summer, are we facing an onslaught of rights, removal of freedoms of which must be defended. Much of the media, newspapers, the News in BBC is controlled by those who seek to control a population which outnumbers them, and in the UK, a government which does not have the majority support of a population, has power to change laws in a parliament which is supposed to serve the people.

Very adept at distraction policies, or scare-tactics, the BBC is neither, neutral politically, or independent, even though it still is respected by the belief in neutrality by many.  We have asked the question before, Who pulls the strings at the BBC? Now the Guardian reports how Tory officals threatened the BBC during the recent election.

Baldwin writes: “BBC executives and journalists have told me that there were regular, repeated threats from senior Tories during this election campaign about ‘what would happen afterwards’ if they did not fall into line.

He says: “It is a disturbing suggestion that a democratically elected government would seek to stamp on and silence dissent from an independent broadcaster.”

But he claims there “has been a long-standing campaign by the Conservative party, fueled by the commercial interests of sections of the press, to attack the world’s most successful state-funded public service broadcaster as a giant leftwing conspiracy”.

And so they hold power, while the scales of justice are so unbalanced they appear to have have a pivotal screw loose. Power could be easily toppled by exposure of truths and myths which has led to the imbalance of truth. The Tories are terrified at the idea of a collective knowledge of truth. Divide and rule, as always, is their aim. They overcomplicate issues leading to doubt and confusion.

This is why we must defend everyone’s  rights of expression through the Arts, the Internet, Blogs. Even if sometimes we don’t agree with them.

If we have a right of freedom of expression, then we also have a right to access information which our representatives are seeking to cover-up because of their own self interest. We are not talking about securing our safety, and protecting the vulnerable. Throughout history many have founght for our rights, from the Tolpuddle martyrs, to the suffragettes, to those who fought against Nazis in the 20th century.  This is not something to be cast away because Mr Gove has the power.

We must oppose the Conservative Government in their attempt to remove human rights.  Gove plans to scrap the policy of the Human Rights Act (HRA)

The Human Rights Act is a piece of law, introduced in 1998, that guarantees human rights in Britain. It was introduced as one of the first major reforms of the last Labour government.

In practice, the Act has two main effects. Firstly, it incorporates the rights of the European Convention on Human Rights into domestic British law.

What this means is that if someone has a complaint under human rights law they do not have to go to European courts but can get justice from British courts.

Secondly, it requires all public bodies – not just the central government, but institutions like the police, NHS, and local councils – to abide by these human rights.

Which rights does the Act cover?

The Act covers all the rights included in the European Convention.

The Act also imposes a duty upon governments to provide free and fair elections.

Trade treaties like TTIP are arranged in secret because those who will benefit from them are a very small minority, and exposure in the public domain would ensure they would be quashed. There is no wisdom in complacency of belief that in the UK because we are some distance from the incident in Bangladesh where a life was lost just because a man had an opinion, we are therefore safe.

The struggle for free speech, for free inquiry and for the liberty of atheism need not be a fight against religion, unless religion is opposed to human dignity. It is a struggle against cowardice and conformism, and against everyone who would crush both truth and imagination into a cramped coffin of orthodoxy.

Protection of rights, freedoms, and those whistleblowers who dare to speak out is tantamount in preserving the last chance for the voices of the people to be heard and shared – if indeed it is not too late for democracy to have a voice at all.