It is seventy years this week, since the Labour Party achieved a landslide victory after the war. It must have been so exciting looking forward to peace, to the promise of a better world for ordinary people. Homes for all, and a National Health Service, a Welfare state. 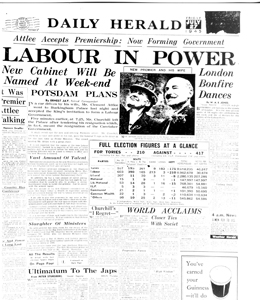 Those days were remembered, in Think Left’s blog Academisation and the Demolition of our Education System

After the war, the hope was that the Labour Party would introduce policies which would change the lives of working class people, leading to a fairer society, and a fair education system was on their list.

It was not just the working class who knew things needed to change. It had been clear that there was a shortage of skills during the war, and this led to the 1944 Education Act  which led to the provision of free state education for all children from 5 -15.

The incoming socialist Labour government, led by Attlee, and inspired by Bevan, brought in popular policies, especially the introduction of a universal National Health Service, and an extensive social housing building programme. To the disappointment of many, a universal National Education Service was not an outcome, and this omission led to decades of disruption to an education service which, as I write, is now at a point of re-privatisation.

Attlee’s government did not go far enough to eradicate the class-ridden divisiveness caused the by privileges from private education and public schools. The state-funded education system introduced was a tripartite system of grammar, secondary modern and rarer technical schools. Selection at eleven would determine the course of a child’s life before even reaching puberty. Meanwhile, the rich and privileged continued to send their children to private and public schools, which opened the doors to an elitist society and via Oxbridge right into the heart of our political system, maintaining class divisions.

Had Attlee’s government made the brave decision to solve the problem of private and Church schools, and introduced a free universal education system for all, and eradicated private education, I believe it would have led to a fairer, and much more settled system which would have benefited all as the NHS has done.

But seventy years on, that dream is still alive. Jeremy Corbyn wants to see a National Education System. Corbyn wants to see investment in education system from cradle to grave. Education is not about training for a job, about ticking boxes and league tables. Education is about enriching our lives – and life long learning. It is fifty years since Harold Wilson’s inspirational Open University which opened doors for so many.

Sadly, Tory cuts and fees have taken the “Open” away and closed doors to this university without walls. Education should not end with a school certificate. There is so much knowledge and skills to share. Education benefits us all. Corbyn’s Education policy will put an end to tuition fees, and restore grants. Building on that, his plan for an NES and a life-long learning service will open up  education for everyone and enrich our lives and our society. And we can start this dream at the very beginning of an incoming parliament. This is exciting, positive politics and the spirit of ’45 is alive again.

“The case for investing in early years education towards universal free childcare is overwhelming. A study by PriceWaterhouseCoopers a decade ago told us that in the long-term universal childcare would more than pay for itself – due to extra tax revenues from those in work and productivity gains. Politicians like to dress up in hard hats and hi-vis jackets on their pet construction projects, but lack the same enthusiasm for investment in social infrastructure.

In 2020 we should start by reversing the cuts to the adult skills budget and expand it into a lifelong learning service by adding 2% to corporation tax (still comfortably the lowest in the G7). This funding would be hypothecated to expand adult learning into a lifelong learning education resource. The extra tax revenues brought by a high skill, high productivity and high pay economy will fund further expansion.

A National Education Service will give working age people access throughout their lives to learn new skills or to re-train. It should also work with Jobcentre Plus to offer claimants opportunities to improve their skills, rather than face the carousel of workfare placements, sanctions and despair. We need a return to ambitious joined-up government.

While slashing college funding, George Osborne boasts of increasing apprenticeships. Yet too many are low quality, failing to give young people the transferable skills they need to get on.

It is clear that some employers are using apprenticeships and traineeships as a means of circumventing minimum wage legislation. This has to end. The minimum wage must be equalised across the board – with no poverty rates like the current £2.73 per hour apprenticeship rate.

Under a National Education Service, colleges should work in partnership with employers to mutually accredit apprenticeships and courses that offer high quality transferable skills. Councils and government agencies should also use public procurement contracts to guarantee good apprenticeships.

The best employers understand the business case for investing in staff – in increased employee productivity and staff retention – and that’s why it is right to ask business to pay slightly more in corporation tax to fund it, while still leaving UK corporation tax the lowest in the G7.

Government must play a strategic co-ordinating role in a modern economy. For too long the UK approach has been to stand back, ‘let the market decide’, then hope for the best. A National Education Service will be a lifelong learning service for a lifetime of opportunity.

How refreshing to hear positive , sensible policies from Labour. Jeremy Corbyn speaks, honestly, pragmatic, socially desirable policies. He challenges the Tory myth of austerity, and these are the policies people have been calling for. All Labour supporters should sign up and vote for Jeremy Corbyn, who is just what the Labour Party and the people of Britain need. He certainly has my vote, my best wishes, and hopes.