What more can we aspire to, but shelter, food, water and warmth for all – guaranteed?

The great Thatcher sell off of private assets, of energy, water, and transport under the guise that privatised means good, and public ownership bad may have fooled a blinkered few in the 1980s but the vast majority of the public know it has failed, and failed miserably. Important, vital utilities such as these should be under democratic control, and public ownership is a popular way of achieving this. It is scandalous that food and water can be treated as commodities to be gambled with. This was the Ultimate Theft. It has been a disaster, and there is widespread public support to bring these Utilities back into public ownership and democratic control.

YouGov’s poll  shows wide public support for renationalisation of these utilities. Labour should not be running scared because the press says so.

Today, Jeremy Corbyn  announced his plans for a People’s Railway. 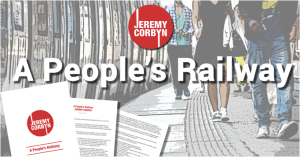 Jeremy plans to replace the rolling stock companies (ROSCOs) with a long-term procurement strategy based on strategic long-term investment in the railways to boost manufacturing, skills and jobs across the UK.

He will oversee a process which will ensure that all parts of the railway networks work together for the common good – with strategic management representing the industry, government (local and national), passengers and workers.

Once again Jeremy’s Vision of a new National Investment Bank is focussed as a source of public investment which will enable a co-operative model of public ownership and fund long-term infrastructure improvements and increased accessibility for disabled passengers.

By re-integrating the UK railways and running them co-operatively for the public good, we can bring social, economic and environmental gains:

“The privatisation of the railways fragmented our rail network meaning the most expensive and confusing ticketing structures in Europe,” said Jeremy.  More here

As Jeremy Corbyn has proved many times, he has the clear vision which  the Labour Party – and this country need to find a way forward for people, and for a caring society. Don’t be scared and timid. This beautifully written article  presents the panic of some politicians as fearful, reflex actions take precedence over considered thought. Why then, are so many in the Labour Party clutching at neoliberalism and trying to make Corbyn out to be an extremist? His policies are moderate and socially desirable.

“The latest explosion of ridicule and indignation finds its target in Jeremy Corbyn daring to speak about ‘public ownership of some necessary things‘. Media is abuzz with ideologues, lexical hair-splitters and supercilious interpreters making great effort to draw attention away from any constructive debate. If public ownership of natural monopolies had been advocated as a vehicle of Cameron’s Big Society I wonder whether the response would be this inane.

Clause Four! Clause Four! Oh, my good gods but the hysteria and vitriol, from both political wings, is woeful and tedious in its predictability. The capacity to focus in on the least relevant aspect of a message is remarkable. Clause IV (commitment to the “common ownership of the means of production”), re-nationalisation, pre-distribution, mutualism, socialism… Really, I don’t give a rat’s arse for the semantic games and the expedient framing they afford. The concept matters more than a loaded label, right now and ‘public ownership’ is an appropriate description. I care about the intention behind socio-political ideas, the mechanisms employed in manifesting them and their socio-economic effectiveness. Personally, it’s neither here nor there, to me, whether Labour feels a need to officially re-establish the principle behind Clause IV into its ethos. That’s for the Party to wrestle with. I am just glad that Corbyn is putting the basic principle front and centre.

As I’ve written, several times, over the last couple of years, I’d like for essential utilities and services, for example: energy, water, health, education, public transport.. to be in public ownership. You know: those upon which we all depend for national prosperity and personal well-being. How such public ownership is achieved, at this late stage, is probably going to vary according to entity, current systems, rational and legality so I’m not pretending that there’s a magic, one size fits all formula. However, the debate needs to be had. Rightists may have ‘won’ the argument once, a couple of generations back but it didn’t follow that they were wholly correct, did it..?

Why would the population of a country wish to create public ownership of those utilities and services deemed so essential to a civilised and prosperous Society? Why would such a population choose to hand over such responsibility, accountability, control and profit to (often) mercenary, private corporations? Why is it named ‘aspiration’ when it comes to the traditional reasons for individuals wanting to own their houses or to be self-employed/entrepreneurial but it is called a regressive notion for a whole nation of individuals to scale this up and share the responsibilities and rewards of collective interest?

As you know, I believe that it is We, the People, who are the State and that the Government and Official Opposition are supposed to be agents through which it is represented and its affairs managed. For a long time it has been self-interest that has been represented and public expectation that has been managed. We can’t say the People are represented when even the prospect of valid and valuable arguments is suffocated by the ignorance and hubris of the TINA Brigade and when all permissible discussion has to be funnelled, first, through an Overton Window of pro-exploitative, short-sighted and incoherent modelling. Markets, competition, the private and corporate sectors have their place but it is self-evident that they do not automatically constitute some socio-economic panacea and it is insulting and patronising to keep insisting that they do. I would rather the country comes to see public ownership as a matter of civic participation in an effort to better secure the collective pride and interest and the sovereignty of its citizens. The past and the present prove that the outsourcing of the most basic needs of Society does not.’